Now This Is A Step In The Right Direction...!


There is no time limit on doing the right thing.

This family could have just continued with their lives, ignoring a wrong done by one of their ancestors long ago, and many folks would never have given it a second thought.

The actions taken here speaks volumes about the family character, if you ask me!

LONG BEACH, Wash. — It was a long time coming, but the descendants of explorer William Clark have tried to make amends for a 205-year-old theft. 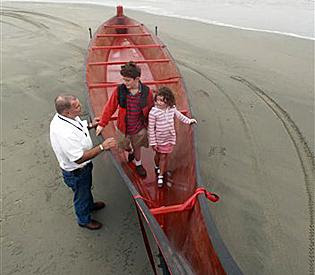 A descendant of the explorer in the Corps of Discovery expedition that opened a land route to the West presented the Chinook Indian Nation with a replica of a canoe that the corps stole in 1806.

Some of Clark’s descendants and a few donors stepped forward to pay for the canoe, which was custom built in Veneta, Ore. The five-hour ceremony on Saturday included songs, gift exchanges and the maiden voyage of the replica canoe.


Ray Gardner, chairman of the Chinook Nation’s tribal council, said the return of the canoe is a "good place to begin healing."

After completing their journey west and spending a wet and wretched winter at the mouth of the Columbia River in 1806, Clark and Meriwether Lewis found they were short a canoe, so they stole one from the Clatsop Indians who had kept them alive all winter.

The Clatsop later became one of five tribes to form the Chinook Indian Nation.

It has long been a sore subject with the tribes in the Pacific Northwest, who perceived the theft as a major insult. Canoes were a sacred part of their culture and an important mode of transportation.

The Chinook Indian Nation is not formally recognized by the U.S. government. Federal recognition would make the tribe eligible for economic assistance, land, housing grants and other government benefits.

"I cannot help but think, if one family can step forward and right a wrong that has been committed against the Chinook nation 205 years later," Gardner said, "it would be nice if the federal government would do the same."

Clark’s descendant, Lotsie Clark Holton, said she was overwhelmed by the acceptance of her family by Chinook tribe members.

Holton learned of the theft while working at a Washington, D.C., nonprofit with Gardner, setting Saturday’s events in motion.

"It’s been a wonderful experience. The Chinook people totally accepted us," Holton said. "After 205 years, it was certainly overdue.

This is a case of someone just writing an interesting footnote to a historical happening of long ago! I think it was a very nice gesture myself...how about you?

I'm in the mood for some fresh coffee on the patio! How about you?
Posted by HermitJim at 12:05 AM

Clark was acting on behalf of the government, so it really wasn't the family's to do, but more power to them. Now if the government would just man up and give them the same benefits as other tribes.

Not a nice way of treating a tribe that kept you alive. It's worse than a having a guest all winter and then they leave with the family car.

It was a good gesture. Healing has to start somewhere.

Love the new look! Thought I had missed a few days or shown up on the wrong page for a moment! Sorry about the confusion of the weekend, although you and I both heard the same thing - we'll try to straighten it out soon. I can still listen, though, so email or call whenever, ok?

Now you peaked my interest, so going to have to drag out my book, From Sea to Shining Sea and reread it. Find out exactly what boat they "stole" .

PS, I wish someone would make a GOOD mini series oR movie of that whole adventure. I think it would be a good one. But James Michner is gone now so who could do it?

Nice thing for the family to do. Yes it should now start the ball rolling with the government. Yah right.
Fast cup of coffee for me its the dreaded laundry day, I really need to get me a washer.
Check me out got lots of cars.

Hey Gorges...
That would mean admitting to wrong doing, and that is something that the PTB are NOT very good at!

Pretty shabby, if you ask me!


Hey Sixbears...
That should have been the writing on the wall for the Indians.

It's a shame that the early settlers and representatives of the government felt they had to act this way, but that's the way they roll...even today!


Hey Sis...
That sort of thing happens more than you know! Sometimes the memories change from hour to hour!

Glad you like the new look! Sort of opens things up a bit!


Hey Ben...
Too bad that the whole story would never be told, otherwise the white man would look like a thief and a bad guy!

The truth is often to hear! Guess that's why the whole story doesn't show up in the history books!

I'm surprised that you don't already have a washing machine. Sure beats going to the laundrymat!

On my way to check out the new pictures!

Wonder how many millions have already been payed the indians and wonder how much stuff was stolen from Clark?