This guy is going to give sailors everywhere a bad name!

Sort of makes you wonder about his mental stability, know what I mean? He just seems to go from one bad blunder right into another one! 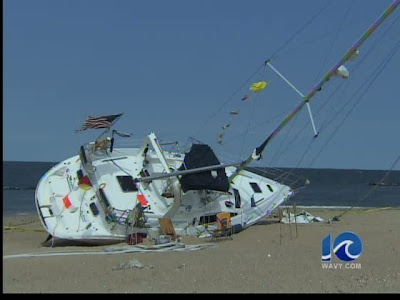 NORFOLK, Va. (WAVY) - It was one of the most memorable sites caught on camera during Hurricane Irene. The Coast Guard rescued two people from a sailboat at 9th View near the Ocean View fishing pier in Norfolk.

Thursday night, police arrested the sailboat owner, Michael Calabrese, for a second time since that incident. Calabrese is accused of being drunk in public. He also reportedly defecated in the back of a police car.

Calabrese met with the Coast Guard and city staff at the site where the boat washed ashore during the storm. According to Norfolk spokeswoman Lori Crouch, Calabrese appeared to be intoxicated, but denied it. There were beer and other alcohol bottles strewn on the beach nearby.

Coast Guard personnel asked Calabrese what his plan of action was to remove the badly damaged sailboat from the beach. He reportedly said he wanted to dig a pit from the boat to the water and then tow the boat to Cobbs Marina. The Coast Guard told him this was not possible, as the vessel was not seaworthy.

Calabrese then agreed to have a detailed plan to the city by noon Friday explaining how he would manage to load the boat onto a trailer for towing instead.

This was Calabrese's second arrest since the August 27 rescue. Calabrese ended up behind bars after he was arrested for allegedly being drunk at a hurricane rescue shelter.

In addition, a judge issued Calabrese a citation to remove the boat from the beach, giving him a September 5 deadline.

I have a feeling that this man has had better days, ya know? Of course, if he wasn't an idiot to begin with, he wouldn't be in this situation!

Since we aren't going to get any rain, let's have some coffee on the patio.
Posted by HermitJim at 12:05 AM

Gee! And here I thought from the picture that he'd just done a bang-up job of "running her aground!"

Hey Gorges...
Wonder just how much practice it takes to do that?

It's true that he did a "bang up" job of grounding it, though!

Me thinks that it is not unusual to get drunk after a loss such as this.
Nor is it unusual for the government to have zero compassion on how to remove said boat.

Everything is rigged for the scavengers to swoop in and gain.
Why does the boat have to be removed by the 5th ? Patience is a virtue we all need practice at....

I can see the temptation to hit the booze after losing a boat like that, but it sure made a bad situation worse.

I do hope the guy can save his boat. Too nice to let the PTB get it!


Hey Spud...
I think I would have tipped back a few afterwards as well! Only problem is getting caught!

Nice boat to have to lose!

Hope all things get better for him!


Hey Sixbears...
Last thing he needed to do was make things worse!

I can only imagine how heart broken he must have been!

How does insurance deal with something like this? Having never had a boat, I really don't know!

Well he is an idiot. If you know your going to be meeting up with cops over something like this you need to think better about being drunk. But is sure is a beautiful boat.

Hey JoJo...
Seems like holding off on the drinking would have been the thing to do, but I guess you just never know!

I'm not sure what I would have done!

Wonder how this guy would react on a really bad day...

Maybe a little bit of duct tape will fix the thing. A FEMA patch?

Maybe he forgot to offer them a beer.