Zombie Fighting In The Old Days...!


Looks like the Zombie Wars have been going on for a lot longer than we would have ever believed!

I'm not sure if I am comforted by this thought or really worried by it!

ONE WEIRD OLD TRICK ZOMBIES DON’T WANT YOU TO KNOW 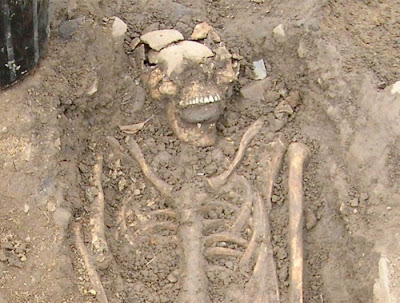 Two early medieval skeletons from the 8th century were unearthed recently in Ireland with large stones wedged into their mouths — evidence, archaeologists say, that it was feared the individuals would rise from their graves like zombies. Rule #15: Large stones in the mouths of the dead prevent them from coming back to life.

The “deviant burials” were comprised of two men who were buried there at different times in the 700s. One of the men was between 40 and 60 years old, and the other was a young adult, probably between 20 and 30 years old. The two men were laid side by side and each had a baseball-sized rock shoved in his mouth.

“One of them was lying with his head looking straight up. A large black stone had been deliberately thrust into his mouth,” Chris Read, head of Applied Archaeology at IT Sligo, said.

“The other had his head turned to the side and had an even larger stone wedged quite violently into his mouth so that his jaws were almost dislocated,” he added. Initially, Read and colleagues thought they had found a Black Death-related burial ground. Remains of individuals buried at the end of the Middle Ages with stones stuck in their mouths have hinted at vampire-slaying rituals. It was believed that these “vampire” individuals spread the plague by chewing on their shrouds after dying.

In a time before germ theory, the stone in the mouth was then used as a disease-blocking trick. Since the vampire phenomenon didn’t emerge in European folklore until the 1500’s, the archaeologists ruled out this theory for the 8th century skeletons. “In this case, the stones in the mouth might have acted as a barrier to stop revenants from coming back from their graves,” Read told Discovery News.

I guess one good thing to know is that Zombies came to this area before the Vampires did. That is a good thing, right? One can only hope that these guys were dead before the stones were crammed in their mouths! Might be a little uncomfortable, otherwise!

I never knew about the "rock in the mouth trick" to help prevent Zombies! See, you are just never too old to learn something new! However, this is one bit of information I hope I never have to use! Just in case, I'm starting a BIG rock pile in back of my house, ya know?

How about some fresh coffee on the patio this morning? We can always move into the kitchen if the rain starts again...or we could sit out here and enjoy getting wet for a change!
Posted by HermitJim at 12:05 AM

Maybe that, and burial alive, was the penalty for gossip.

Zombies freeze up solid here in NH. No worries.

Do you ever wonder what beliefs we have now will cause our ancestors to shake their heads?

Very interesting; I didn't know this. I agree with Sixbears, too cold up here for zombies.

Zombies are real Today , They are easy to spot, just look anywhere teenage kids rather. All of them have that blank stare, oblivious to the World around them. Usually their eyes are locked onto the device in they have in their hands or attached to their ears.

Sounds like good treatment for some of the District of Criminals. Thanks for the story and have a great Monday.

Now thats horrible. Like you said I sure hope they were dead already. and what about his crushed skull?

I am so happy to hear about your rain. I hope it sticks around for awhile. Ours has finally finished and the sun is shining nice a bright.It is currently 49 degrees but it doesn't feel so cold.
But coffee is good on the patio.

Hey Gorges...
They did have some pretty severe penalties for talking out of turn, didn't they?

Seems to be a rough treatment, no matter what the offence!


Hey Mike...
I'd say that California is a good place for 'em!

I don't think they would like Texas very much right now, anyway! Too dusty!


Hey Sixbears...
I'm thinking that we may have more than a few things we do now that will cause our future ancestors a lot of wonder!

Heck, I wonder myself at some of the things we do!

Thanks, my friend, for coming by today!


Hey Linda...
Looks like you and Sixbears are well protected from these types!

Tell ya what, I'll take the Zombies and you keep the cold!


Hey Momlady...
That's just because you are a tough ol' lady!

I want you on my side if the Zombies attack, OK?


Hey Ben...
Come to think about it, I've seen some of those just recently! Now I know what was wrong with them!

Hey Mechanic...
That would probably be a good place to start!


Hey JoJo...
Being Texas, you just never know what the weather is going to do in the next 5 minutes!

I figure I'll just enjoy it while it's here!

Thanks, sweetie, for your visit today!

They have found bodies with stones in their mouths here too but nothing that old. Another thing murderes usually did to stop the dead man to haunt them was to pull a wooden strake through his heart. But I don´t think we ever have believed in vampires here though.