Just In Time For Breakfast...!


I found this story that I thought was just perfect for this morning!

Even though it's very old, it just sort of makes a perfect post for a Saturday! Besides, I like old things! You can tell that by looking at my clothes!

By Alexis Madrigal
Sept 2 2010, 2:50 AM ET 5
Ok, I admit it: there's no tech hook to this post. But I would be failing in my duties as your faithful Internet curator if I'd come across a photo of a young woman with bacon tied to her feet standing in a giant skillet holding a huge spatula and declined to post it. 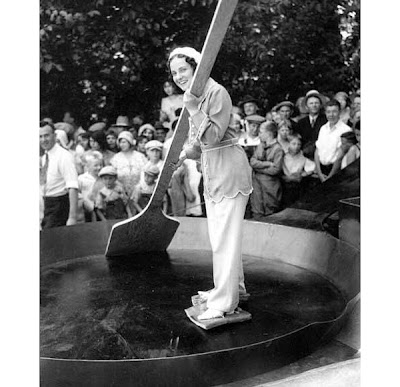 So, yes, this photo was taken in November 1931 in Chehalis, Washington at the town's Egg Festival. The occasion was a try to break the world record for largest omelette. Two women tied bacon to their feet and skated around the warming skillet to grease it. Then a team of chefs cracked and beat 7,200 eggs and made a breakfast delight.

Vern Gorst, a self-taught pilot and entrepreneur was on-hand to capture the momentous occasion. He donated his photo collection to the University of Washignton, who uploaded it to Flickr Commons. 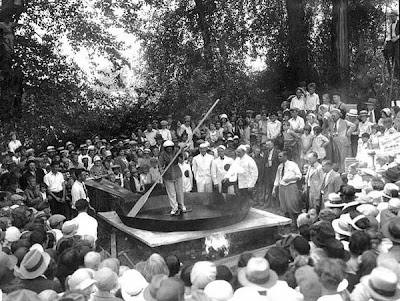 I think this just goes to show that folks have been doing some crazy things to obtain world records for a long time! Biggest pancakes, biggest burgers, longest cars, largest cakes, and even the world's biggest omelette...just like these folks
are doing!

All I can say is that is a good thing most of these people had chickens back in those days! At today's prices, this would be a costly breakfast!

Coffee on the patio anyone? Maybe a slice of lemon cake to top it off!
Posted by HermitJim at 12:05 AM

You know, years ago, people knew how to have fun! When I saw the picture, I thought of all the old Lucy episodes where she did so many crazy things like this. Thanks for the reminder that we don't have to have techie things to have a good time.
I bet all that peach cobblers gone.

Hey Sel...
Back in those days, the telephone was still a novelty! People made their fun any way they could, when they could!

Actually there is a pretty good crowd at this gathering, so it must have been quite an event!

Thanks so much for coming by this morning!

Hope they didn't get the hot foot!

Ya Want Fries with that? Wannta super size that for a dollar more?

I remember the telephone booth stuffing with live bodies and of course how many could you get into a VW Bug!
Just harmless fun events. We need more of that these days huh?

WOW that's a lot of eggs yes these days that really would have been expensive. But what fun to watch I bet.
50 degrees this morning, so I will head over to your place for some coffee and lemon cake on the patio.

If I had been there, I would have volunteered to eat some of it. Think maybe that is why so many people are there? Free breakfast?

I just an omelet for breakfast. When I saw that monster pan, I had to wonder: did they fold it?

Hey Gorges...
Want to bet that she had some dogs following her around the rest of the day?

I guess there are a lot of worse things you could smell like besides bacon!

The secret to not getting a hot foot is to keep moving! Might get a few grease splatters on your pants, though!

Many thanks for coming by today!


Hey Ben...
I don't think the fun activities back then were as deadly as they are now!

Wonder who has to do the dishes?


Hey JoJo...
Sounds to me like the weather is really treating you right!

It's a lot cooler in the mornings here, but still hot in the afternoon. And of course, no rain!

Good to see you this morning, sweetie, and thanks for coming by!


Hey DD...
Could very well be! You know how some folks are about free food!

I figure that with plenty of hot sauce and some salt, it should be pretty good eating!

Thanks for coming by, my friend!

Hey Sixbears...
They certainly had enough folks there to turn it, but I bet that it wasn't easy!

Would have been nice to have some more pictures of the turning and the cutting!