Another Christmas Favorite From The Past...!

Of allmthe favorite toys from the past, this one is probably my least favorite of all. I hated it!

There were 2 reasons I hated it...one, I was working in retail at a well known discount store in Austin when the doll came out and we were fighting for our lives! Second, to me the doll was just plain ugly! 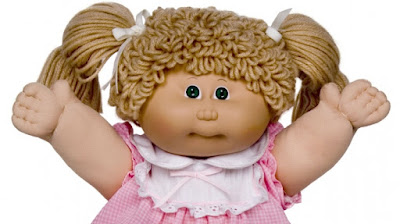 For Christmas 1983, all bets were off. Every kid wanted to “adopt” one of Coleco’s squishy-faced Cabbage Patch Kids dolls, and parents were willing to take extreme steps (Pushing! Shoving! Fist fights!) to make it happen. As Cabbage Patch mania swept the nation, the dolls sold on the black market for 10 times their retail price of $25. By the end of the first year in 1983, 3 million Cabbage Patch Kids were sold (adopted). The product continued to exceed all expectations in 1984 resulting in $2.5 billion in retail sales. Though the craze eventually subsided, and the company went bankrupt in 1988 after costly failed ventures in video and computer games, Cabbage Patch Kids are still available from Wicked Cool Toys. Babyland General Hospital, the Cleveland, Georgia, home of the Cabbage Patch Kids is the only place in the world where you can witness the birth of a hand-sculpted doll.

I realize many, many folks fell in love with the critter, but I wasn't one of them.

Coffee back out on the patio this morning. It isn't too bad!
Posted by HermitJim at 12:00 AM

You were not the only one. My oldest daughter didn't want one and she was the right age to want one, too. She told her dad that her grandma (my mother) could make prettier dolls than that. Can't remember what she wanted instead, probably a horse.

Been kind of cool here in Phoenix. How about some blueberry scones fresh out of the oven to go with our coffee?

Couldn't stand them then, can't stand them now. Have never been to Babyland(which is in the next county close by)and never will. They're still ugly. Scones sound wonderful, Judy. Thanks!

I never could see what people saw it that doll - it was just plain ugly. It is 13 degrees here this morning and the sun is finally coming out. Thanks for the scones Judy.

They are still making these dolls, but in smaller sizes and more ethic groups. I was surprised to see so many when I was shopping. No I didn't buy one, the price was high.

We are warmer this morning at 52 for the over night and will be in the low to mid 70's today.

They never became that popular over here in Sweden but we all heard the stories and saw the lunacy on tv, if I remember right they showed how people behaved in a store in New York :-) and I agree, they are truly ugly :-)

Have a great day!

Hey Judy...
Sounds like your daughter and I think alike.
Thanks for stopping by today!


Hey Momlady...
I'm with ya on that, my friend. Never saw the attraction myself.
Thanks for coming by today!


Hey Phyllis...
Amazing that they can convince folks how much and what they need.
Thanks for stopping by today!


Hey Linda...
I certainly have to agree with you!
Thanks for the visit today!


Hey Jo...
Seems like some toys just never go away completely. Folks must still buy them if they are still making them, right?
Thanks, sweetie, for dropping by today!

Hey Christer...
For some reason folks seem to act like crazy people over something as silly as a doll.
It's sad when they do that!
Thanks for stopping by today!