Although many folks know the name of Sam Houston and part of his story, here is a bit of his history you may not know.

One thing about history, what we learn from the school books rarely tells the complete story. Many things get left out, twisted, or completely ignored. In Sam's case, the part often left out may change the way you think about him.

Houston opposed the secession of Texas to the Confederacy. 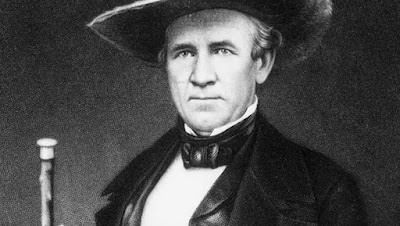 Although a slaveholder himself, Houston repeatedly voted against the spread of slavery to new territories of the United States during his 13 years in the Senate. An ardent advocate of the Union, Houston was the only Southern governor to oppose secession in the lead-up to the Civil War. Over his opposition, a state convention voted on February 1, 1861, to secede by a margin of 168 to. 8. When Houston refused a month later to swear allegiance to the Confederate States of America, the Texas legislature deposed him and replaced him with the pro-Confederacy lieutenant governor. Houston turned down a Union offer to lead a 50,000-man force against the Confederate rebels and retired to Huntsville, Texas, where he died in 1863.

Well, I hope I managed to tell ya something new about Sam. His early history makes for some interesting, in case you're interested.

Coffee out on the patio this morning. Temps are suppose to go up to 72.
Posted by HermitJim at 12:00 AM

Well, once again I learned something new. I had never heard that story before. Thanks for sharing. Coffee on your patio sounds great; I'll bring an almond Kringle to share.

Wow - even I didn't know that, Bubba. What a story! Thanks to you and your sources ~
Big hugs -

Didn't know these facts, more to add to my history memory back.

Patio sounds good for a change. we have had a beautiful week but next week cold again.

Hey Linda...
Glad that I could share a bit of new history with you. I love finding unknown bits to share.
Thanks for stopping by today!


Hey Sis...
I figured you would like the Texas history this morning. Sam was a character, that's for sure!
Thanks for coming oer this morning!


Hey Jo...
I know how you like the history stuff. Sam lived with the Indians at one time and was even married to one. How's that for some spicy history?
Thjanks sweetie, for dropping by today!

I'd never read that before!

Hey Gorges...
Always fun to read something new, right?
Thanks for stopping by today!

About 70 years old when he died. Thanks for passing this one on!

Hey Rob...
You are certainly more than welcome, sir.
Thanks for coming over today!