Snake are fairly scary to most of us, or at the very least make us nervous. Here is one that I'm sure will get your attention. 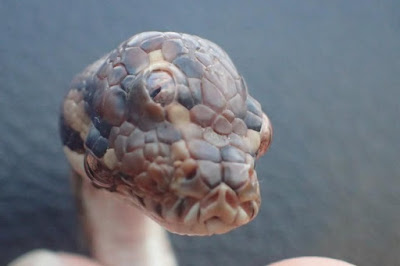 Wildlife authorities from Australia reported the discovery of a snake with three eyes.

The baby carpet python was found in March on a highway in Northern Australia, near the town of Humpty Doo. X-ray scans revealed that the snake did not have two heads that formed together but rather a third eye socket in its skull. All three eyes appeared to function normally. Snake expert Professor Bryan Fry believed that the deformity could have been the last bit of a twin that had been absorbed during development.

The Northern Territory Parks and Wildlife Service took charge of the unique reptile. Wildlife officers nicknamed him “Monty Python,” although people were more inclined to think of Game of Thrones, which has the Three-Eyed Raven.

Sadly, Monty died a few weeks after it was found. While cause of death is undetermined, the reptile was struggling to eat due to its malformation.

Just when you think you have seen it all, nature throws another curve ball.

Wow, that is cool. Would have loved to see it.

Hey Linda...
Certainly was different.
Thanks for stopping by today!

Hey Mamahen...
I can understand that completely!
Thanks for coming by this morning!

I hate snakes period. I don't mind spiders and not crazy about scorpions but not creeped out by them even though I have been stung. But snakes nope not for me.

Now after seeing that thing I will need extra coffee

Hey Jo...
I'm not too fond of them either.
Thanks dear, for dropping by today!

Hey Dizzy...
Now that you mention it, I realize you're right.
Thanks for the visit today!