Depending on who you talk to, ol' Jesse was a good guy or really bad! Regardless of either one, he was a thief!

It does seem that from time to time, he did what he could to help out a few folks, but there was usually a catch. This story shows just one way the catch might have worked! 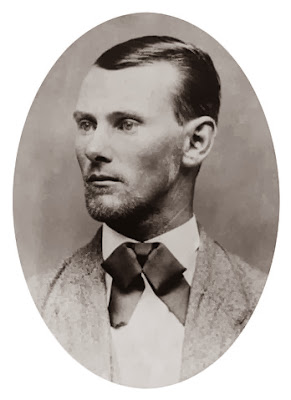 On April 3, 1882, notorious American outlaw Jesse James was shot in the back of the head by Robert Ford, one of his few trusted (oops!) accomplices. Ford and his brother were seeking the $5,000 bounty on James' capture, dead or alive, an amount (well over $100,000 in today's dollars) which underscores how badly law enforcement wanted the 34 year-old James. (The amount was so high that Thomas G. Crittenden, the governor of Missouri at the time and the man who set the bounty, had to appeal to railway owners and express shippers to fund most of the amount, as it was beyond the limits allowed by state law.) And the extraordinary bounty was well-deserved. Since the age of 18, James had been involved in numerous bank heists, train robberies, and ultimately, murders. While his later legacy became one of a modern-day, real-life Robin Hood, that's mostly undeserved. By almost all accounts, James was a sociopath.

There may be one exception, though.

There are many myths surrounding James' life, but the generally reputable "Bartlett's Book of Anecdotes" (from the same group that bring us "Bartlett's Book of Quotations") tells the story of a time that James, on the run after a successful heist, came to a farmhouse. The lady of the house, a widow, graciously took him in, but wasn't much of a host. It turns out that she was deeply in debt and unable to provide for herself, let alone an unexpected guest. To make matters worse, the debt collector was on his way, expecting to collect $1,400 (approximately $30,000 nowadays). She didn't have that kind of money, but James, contrary to his deserved reputation for not caring about the plight of others, solved her problem. He gave her the cash she needed to pay off the debt collector, who accepted the payment and went on his way.

But that was the extent of his kind-heartedness. As Bartlett's further notes, soon after James left the farmhouse, he circled back with his gang -- and they held up the debt collector, retaking the $1,400.

Stories like this one show how many folks thought of James as some kind of folk hero, but he was still a thief and outlaw. History always seems to embellish the tales of the olden times to make the characters larger than life.

Coffee in the kitchen again. Warm but the chance of rain is still here!
Posted by HermitJim at 12:00 AM

Yeah, but it's hard to feel much sympathy for a debt collector who'd put a widow out of her home.

Hey Gorges...
That it is! Luckily for the widow, James told her to be sure and get a receipt.

Guess that's the kind of thing that made him a folk hero!

Well.....least he did help that poor woman, got to give him credit for that. 37 chilly degrees here this am. Kitchen sounds nice biscuit n sausage gravy sound good if I could have the use of your stove i'll whip some up for everyone...

Probably knew he could get the money back, that's why he gave it to her. Breakfast sounds good, Mamahen. You cook and I'll do the dishes! Sausage and biscuits and gravy - yum!

He was trying to play Robin Hood. Still doesn't make it right.But what the heck, he helped out a widow. History always seems to make folk heroes out of the bad guys.

It was nice of him to save the little lady. And yes a debt collector usually are nasty people maybe even worse that James.

The temps dropped down into the mid 40's for over night lows but the 70's for me are a delight.
breakfast sounds wonderful, I'll bring fresh ground coffee.

Howdy HJ,
Well, some folks think he planned his own death, used another man's body and slipped off down to TEXAS, dying as an old man in GRANBURY, TEXAS and is buried in the cemetery there.. Whenever 'his' headstone is shown on TV my great-grand-father's fenced-in grave is shown, above the headstone... A few years ago the cemetery exhumed a skeleton from the grave, but IT HAD ONLY ONE LEG
Such are mysteries made of !!!!

Hey Mamahen...
My stove is your stove!

Nice of him to lend her a hand!

Hey Phyllis...
Dang! I like having someone do the dishes!

I reckon that he knew he would get the money back!

Hey Linda...
Yep, we do have to give him credit for that!

I guess we create our heroes from the olden days, 'cause we sure don't have many today!

Hey Jo...
No one likes the tax collectors!

Thanksw, sweetie, for dropping by today!

Love these kinds of mysteries! They never get boring!