The Crazy Story Of Corn Flakes...!

Many of the foods we take for granted these days had a strange beginning. One of the strangest is Kellogg's Corn Flakes!

Like several of our modern foods, the Corn Flakes were originally passed off as a health food. When you hear the rest of the story, you'll understand the reason I call this story crazy! 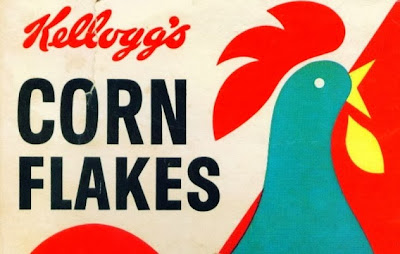 The rise of the Kellogg empire could easily comprise a list of its own. The short version begins with John Harvey Kellogg, who was trained as a doctor and promoted a vegetarian lifestyle in accordance with his Seventh Day Adventist beliefs. But Kellogg took the restrictive Victorian conventions of the day and threw them out the window.

Among other weird practices, Kellogg espoused the constant administration of enemas. After your enema, you’d be treated to a pint of yogurt. The patient was allowed to eat half of the yogurt, but the other half would go straight up the patient’s rectum, ostensibly to replenish the bacterial levels of the digestive tract.

Of course, J.H. Kellogg’s greatest contribution to society is the corn flakes he distributed with his brother William. Some years after founding the Sanitas Food Company, the two brothers would butt heads on the issue of whether to add sugar to the cereal. Will would go on to found the company that would later become Kellogg. Sugar has since been an integral ingredient of the company’s success in the peddling of such products as Frosted Flakes and Pop Tarts. A highly fictionalized account of John Harvey Kellogg’s life can be found in T.C. Boyle’s novel The Road to Wellville.

Considering it's shaky start, the Kellogg's company enjoys it's status of one of the leading producers of breakfast foods to this day.

Speaking of breakfast stuff, I'm ready for some coffee in the kitchen. How about you?
Posted by HermitJim at 12:00 AM

Of course they use genetically modified corn now so who knows what chemicals are in the stuff.

Have you heard of getting drunk by "butt chugging"? Boy, humans...

Interesting, Mr. Hermit! We usually don't think much about products that have been around for a long time. It's 24 here - coffee in the kitchen is fine with me!

Very interesting article. As a child my parents didn't feed us sugared cereal. However, my son grew up on Sugar Pops. Now I try to avoid any cereal with sugar. Getting old I guess. Have a great weekend.

The trouble with corn flakes is that they are made out of corn. I try never to eat corn or corn products because of the high levels of mico-toxins they contain from the fungus or mold that grows on the ears in the field and in grain silos.

Well I guess the one was a bit of a nut case with his ideas. Gives me the willies. Will was smart to break away and start his own company.

It is cloudy here today and another wind advisory. but right now it is really nice out at 65.
I'll join everyone in the kitchen for some friendly chit chat and good coffee

Guess we never know what quirks lie behind the things we just see everyday and never bother to question.. Intresting post as usual :))

I grew up not far from Battle Creek, MI where Kelloggs cereals are made. They give tours and at the end desserts made with the cereals. Even the schools I attended were in the Kelloggsville School District.