The Kiddie Murders For Monday...!

The topic isn't pretty, but the fact that it remains unsolved makes this a perfect candidate for Monday Mysteries.

This particular story has all the attributes of a great, but sad tale. So many strange twists and turns here, it makes for a diffident rainy day type study. 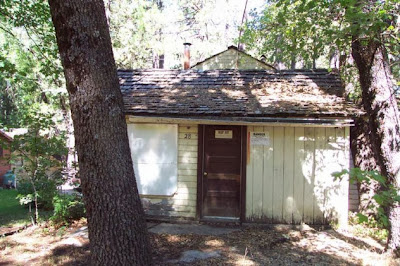 The horrifying Keddie murders bring to mind hockey-masked, machete-wielding maniacs roaming the forest. On April 11, 1981, while vacationing in a resort town near the Sierra Nevada Mountains, Glenna Sharp, two of her children, and a family friend met a grisly end in their cabin. On the morning of April 12, Sharp’s 14-year-old daughter, who had been staying in another cabin with friends, returned to find her mother, her brother John, and their teenage friend Dana, dead. Her sister Tina, age 13, was missing. The interior of Cabin 28 had been destroyed: Blood was splattered over every surface, the furniture was smashed, and the walls had been gouged with blades. The bodies were bound with tape and horribly mutilated. Three younger children who had been staying in the cabin were found unharmed. They claimed that two assailants had tortured the family with kitchen knives and a claw hammer over a period of 10 hours, taking Tina with them when they left.

Though there was another cabin just five meters (15 ft) away, and though the primeval carnage must surely have been noisy, neighbors claimed they never heard a thing. A massive investigation was launched with FBI involvement, but no leads or suspects have ever panned out. In 1984, the skull of Tina Sharp was found in another camp some 80 kilometers (50 mi) away. In the years since, there was talk that Cabin 28 was haunted. The resort fell into disrepair and was frequented by squatters and vandals. People claim to have seen figures lurking behind the windows and hearing unearthly moans in the murder cabin. The owner razed the building in 2004.

Sometimes I wonder why it is that we are so fascinated with unsolved mysteries. Reckon that it is just our need to put things in some kind of order? Perhaps we merely love the exercise of turning over new ideas in our mind...who knows? One thing for sure, we will always have a morbid interest in stories like this, don't you think?

Coffee in the kitchen this morning, as it's still a little cool outside. Honey butter biscuits are on the table!
Posted by HermitJim at 12:00 AM

Maybe it has something to do with our quest to know "why."

Wonder what happened the the kids that weren't killed?
It's 20 out. Brrrr! Same some of your honey biscuits!

What a gruesome murder. Sure would like to know why someone feels the need to act this way. Cool, cloudy and very windy here. Honey biscuits sure sound good.

What a horrific story. I just can't imagine that no one heard anything. That in its self is a mystery. There are way to many sick people in this world. Very scary for sure.