Something Different For Monday Mystery...!

I think that this mystery is a tad different from what we usually have here, so maybe it's a good one!

Normally a mystery like this stays close to the same place, but in this case it seems to bounce all over! That alone makes it a good mystery to me! 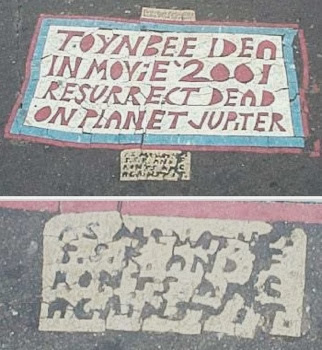 The Toynbee tiles are messages of mysterious origin found embedded in asphalt in about two dozen major cities in the United States and three South American capitals. Since the 1980s, several hundred tiles have been discovered. They are generally about the size of an American license plate, but sometimes considerably larger. They contain some variation on the following inscription:

The majority of tiles contain text similar to that above, although a second set is often found nearby. Several of these allude to a mass conspiracy between the press (including newspaper magnate John S. Knight of Knight-Ridder), the U.S. government, the USSR (even in tiles seemingly made years after the Soviet Union’s dissolution), and Jews. The writing is of a similar style and poor quality. A tile that used to be located in Santiago de Chile mentions a street address in Philadelphia, Pennsylvania: 2624 S. 7th Philadelphia, PA. The current occupants of the house know nothing about the tiles and are annoyed by people who ask.

Nothing like a good mystery to get the ol' imagination to flowing freely, right? Makes for an interesting discussion around the coffee circle!

Speaking of coffee, let's have ours out on the patio this morning. Sound OK to you?
Posted by HermitJim at 12:00 AM

Wow, seems I say that alot here on Mondays lol....but I had never heard of these. Guess I will have a cup n ponder. Made some chocolate chip cookies last night if anyone would like one!

Now that IS a mystery. Hurray for the sunshine here.

Wow, that is one I never heard of before. Very interesting. Cloudy, cold and very windy here. The tornadoes that swept thru the Midwest didn't affect my area for which I am very grateful.

I have never hear of these tiles either. Some cult I imagine. crazy people are everywhere.

It's nippy here this morning at 48 but damp too. So I will have a cookie mamahen made with some nice hot coffee.

They are clues to the geocache for the people (or creatures) of Jupiter. . . (grin)

Hey Mamahen...
I like putting stuff up that no one has heard of! Gives us all something to ponder!

Hey Momlady...
Glad you liked it!

Hey Jo...
Crazy just about says it all!

Hey Dizzy...
Sounds as good as anything else, I reckon.

Very odd but just a good mystery as any :-)
Like Always when I can't figure out an answer I blame the aliens :-)

Hey Christer...
Seems to me that many of us just take out our frustrations on the poor Aliens! They might be responsible, though, now that I think about it!