Just like the old commercial used to say, it's not nice to fool with Mother Nature!

For every stupid move we make at nature, you can bet that she will get some payback in a big way! The one thing that man can do better than nature is show his stupidity! That's a contest man will win, hands down! 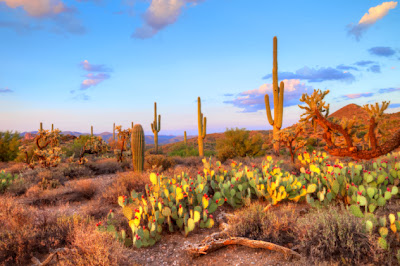 David Grundman had two things: A shotgun and a massive need to shoot at things. So one day in 1982, David drove into the desert with his friend, in order to go nuts with his weapon. He opened fire at some small saguaro cacti (large, vaguely man shaped cactus plants), obliterating them with his shotgun shells. However, destroying small saguaros was way too easy: He needed a bigger, more powerful target.

So Grundman focused his attention on a huge, 26-foot (7.92 meter) saguaro they found nearby. He opened fire at it, and with just one shot managed to blast off a whole, massive chunk of the plant’s “arm.” Some accounts report he even started shouting “Timber!” as the cactus fell, although he only got as far as “Tim–” before he was interrupted.

In an impressively instant case of revenge on the part of mother nature, the wounded cactus fell directly on Grundman and crushed him to death.

Does it ever seem to you that mankind is bound and determined to destroy everything around him? It's as though we aren't happy unless we are tearing things apart! Guess this story proves that sometimes it's best to try and play nice...or else!

Coffee back in the kitchen this morning. The rain came back late last night!
Posted by HermitJim at 12:00 AM

Some get their punishment immediately :-) I can't say I feel sorry for the guy.

Have a great day!

Hey Christer...
I feel just the same way, my friend!

Not only do I not feel sorry for the guy, I applaud the cactus.

Ha - bet he was prickled to death!
Send your rain up here - we didn't get hardly any from that storm yesterday. Chocolate honey dipped for all!

Those without the brains to create chose to destroy.

Souds fair to me!!! See everyone in the kitchen..thanks for the invite!

I SO hope this story really is true!

This is a true story I remember it well. And even worse that him shooting up these beautiful cacti is the jerk who went out there with a chain saw and cut down lots of them. He got prison time but getting crushed would have been so much better.

I'll be delighted to sit in the kitchen this morning.

Payback is a bitch, isn't it? Glad he got what he deserved!

I love it when Mother Nature fights back.

Howdy HJ,
Yeah, I heard about this stupid idiot, back when it happened and laffed when I read how the cactus crushed him; he was probably 'high' on something or just so stupid he thought it would fall upward !!!

Our county commisioner has to go around and repair the caliche roads after every rain be cause the a..h...s with the 'high-rise' 4x4 trucks TEAR-UP the roads, so badly !!! He'd like to catch'em, doing it but never does...

He deserves a Darwin award.