On the best of days, war isn't pleasant. Certainly it shouldn't be considered a spectator sport, one would think. However, here is a report of what happened when a picnic atmosphere turned deadly for folks wanting to see some carnage and destruction. 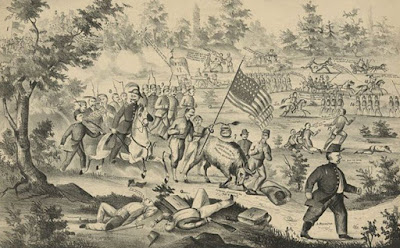 At the beginning of the US Civil War, the first major battle took place near Centerville, Virginia. The expected outcome was an easy victory for the Union Army and a rapid defeat—and quick end to the war—for the Confederates.

The certainty of this was so believed that a good number of civilians turned out with sandwiches and opera glasses to watch the Civil War begin and end before their eyes. Some of their number even included Senators and Congressmen.

Instead of an easy victory for the Union, the Confederate Army ultimately broke the Union lines and forced many soldiers to flee—right into the picnic. Civilian picnickers and soldiers alike ran from the battle together. Senator Henry Wilson even passed out sandwiches to the fleeing Union soldiers.

This was not a good day to have a picnic close to a battlefield, I would think. Not a good idea at any time, so it would seem.

Coffee inside once again this morning!
Posted by HermitJim at 12:00 AM

Labels: bad location for a picnic

I had never heard about this. WOW!
The kitchen is good. I'll bring some biscuits and peach preserves if anyone would like one:))

Hey Mamahen...
Always glad when I can find something to share that isn't common knowledge. The biscuits sound good to me!
Thanks for stopping by today!

Don't think I would want to picnic anywhere near an active battlefield. Way too much noise, dust and dirt. Not to mention the flying artillery shells and bullets. Crazy way to find entertainment back then. Beautiful cool, sunny, morning here. Thank you Mr Hermit for this interesting story and thank you Mamahen for the biscuits and peach preserves.

Hey Linda...
I do believe I could have found a better form of entertainment somehow.
Thanks for coming over today!

Wouldn't find me at that picnic good grief.

Biscuits! OH thank you Mamahen and the kitchen sounds fine

Hey Jo...
Like you I certainly would not attend that picnic. Too noisy for me.
Thanks, dear, for dropping by today!