When we think of a place lke the National Archives, we would think that security would be considered an important feature, right? Not so, evidently. Many objects of historical importance have gone missing and some, not all, have even been found. From Listverse, here is a case of some of those missing items. 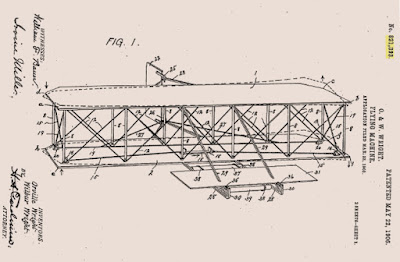 The National Archives store some of history’s most prized and rarest documents. Security is tight in the most important anthropological storehouses in the world, yet this hasn’t stopped thieves from making off with some of its priceless pieces.

The patent papers that describe in detail Wilbur and Orville Wright’s concept for a flying machine were lifted by an unknown crook without anyone noticing. Not until 2003 did anyone discover that it was missing, and since then, no one has been able to apprehend the culprit.

Thefts at the Archives have become so common that an armed task force has been assigned to track down the missing pieces. The photos taken by astronauts during the Moon landing have been recovered, as have the audio tapes from the Hindenburg crash. But until someone tries to auction off hand-drawn airplane sketches from the early 1900s, we may never know where the patent papers took off to.

It seems to me that a place where so many of our important pieces from history are stored would certainly have more security in place, but evidently the PTB don't place as much importance on these pieces as you would think. That's a shame, really. Don't you agree?

Coffee in the kitchen this morning. Rain chances are good again today!
Posted by HermitJim at 12:00 AM

I sure do agree with you. You would think security would be air tight. Maybe the Movie National Treasure is so far fetched if stuff can be stolen and never even noticed it's gone. Agree with you about TPTB.

Hey Linda...
Sorta makes you wonder, doesn't it?
Thanks for coming over today!

I agree how can someone just walkin and take things undetected? Not very good security unless it's inside job and they know how to slip by.

See you in the kitchen

Hey Jo...
Inside job seems pretty likely to me. Guess we will never really know.
Thanks for dropping by today!

This just blows my mind.

Hey Mamahen...
Doesn't inspire a lot of confidence, does it?
Thanks for stopping by today!