Here is something that you might find interesting. From Listverse, this is an article about a few blue eyed coyotes . 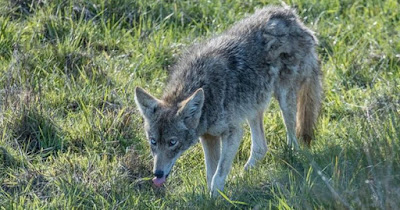 Coyotes look at the world with golden brown eyes. For this reason, it came as a shock when five coyotes in California turned up with piercing blue eyes. When the photographic evidence was shown to experts of eye color in wildlife, nobody had seen anything like it. Two of the animals trotted around in Point Reyes while the rest lived in Santa Cruz and Sacramento.

In wild animals, eye color remains consistent. This drastic change is still unsolved, but at least researchers have ruled out interbreeding with dogs. Domestic dogs sometimes have blue eyes, and they do have puppies with coyotes. However, these crossbreeds have distinctive faces and coat colors but never blue eyes.

A genetic mutation is more likely. The suspicion is that a single coyote was born with blue eyes a few generations ago and the California five could be this animal’s descendants.

Nature is sure filled with wonders, don't you think?

Coffee inside this morning. Rain is coming back. Gingersnaps anyone?
Posted by HermitJim at 12:00 AM

Interesting! Thanks for the invite...ginger snaps sound good:))

Pt Reyes, Santa Cruz and Sacramento? That is quite a geographic spread for an animal that not does drive.

The experts see something they have never seen, blue eyes, and know it couldn't happen by interbreeding because they'd never seen it before?

Heck of a mystery!

Interesting but I'm not buying that it isn't interbreeding.

Kitchen is fine with me out humidity is up and dew point is pretty high pressure is rising too just waiting for the rains to come.

Hey Mamahen...
Glad you like it and you are more than welcome for the ginger snaps.
Thanks for coming over today!

Hey Linda...
Who knows for sure. All we can do is guess.
Thanks for stopping by this morning!

Hey Rob...
I'd say it's all educated speculation.
Thanks for the visit today!

Hey Jo...
Well, you know they are coming sooner or later...right?
Thanks, dear, for dropping by today!