Sometimes we just can't find a way to solve a crime, even using all of the modern tools we have today. Here is one such story from Listverse.


The Boy in the Box 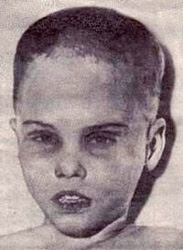 Labels: boy in the box

Hey Linda...
Getting water logged, are ya?Thanks for stopping by today!

I agree with your thinking that these days, it would seem hey should be able to identify this poor boy...We had the first dry weekend, since late Febuary, this weekend, but it was pretty warm for our area. Its pretty pleasant this morning, although they are saying it will be around 90° this afternoon.

I agree in this day with all the technology that they can not use the DNA to trace his family. So sad.

It's sad and it makes one wonder.