This one has been around for a while, but still remains a mystery to this day! That's the kind we like, right? 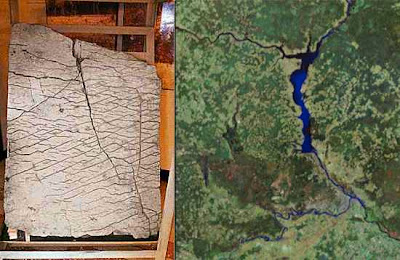 In terms of mysteries, few come along as incredible and irrefutable as The Ural Relief Map. In 1995, Aleksandr Chuvyrov, Professor of Mathematical and Physical Science at Bashkir State University in Russia, was investigating hypotheses of the immigration of Chinese Migrants to Siberia and the Urals. During his research he heard an account from the 18th century telling of a series of strange white slabs scrawled with some unknown language. As they were supposedly situated in an area central to his study, a remote village named Chandar the southern Urals, he thought the stones could be of Chinese Origin. and organized a team and helicopter to try and locate them. After several searches and village hopping in his helicopter he could find no trace of the elusive stones. It was then that a village elder approached him and asked him to take a look at a strange slab he found in his back yard. The slab he was taken to was the Ural Relief Map, also dubbed ‘The Map of the Creator’

Showing a relief scale of the entire southern Urals, the slab accurately shows its three main rivers, the Belya, Ufimka and Sutolka, as well as the Ufa canyon. After the map was studied further it was understood to show a giant irrigation system, consisting of two 500 meter wide channel systems, 12 dams, each 400 meters wide, 10km long and 3km deep. It is calculated that 1 quadrillion cubic meters* of earth were shifted to allow for the dams to be built. After initial tests failed to provide an age for the stone, a breakthrough was made when 2 types of prehistoric shell were found embedded in its surface, Navicopsina munitus and Ecculiomphalus Princeps. The former existed 500 million years ago, while the latter existed 120 million years ago. Scientists place its actual age at 120 million years. A geological test of the slab concluded that it consisted of 3 layers, the base being 14cm thick dolomite, the second being a diopside glass unknown to science, while the third is a protective layer of calcium porcelain. Chuvyrov said ‘It should be noted, that the relief has not been manually made by an ancient stonecutter. It is simply impossible. It is obvious that the stone was machined.’ X rays confirmed it was made by precision tools. Interestingly scientists believe that the map is actually part of a relief map of the entire world, due to the crudeness of the areas around the maps’ perimeter. Soil tests of 400 types of soil in the area, in comparison to the ones found embedded on the stone, have allowed scientists to narrow down the possible location of other pieces to 4 specific areas around the village of Chandar. So what is the Ural Relief Map? God’s discarded blueprint? Ancient Extra Terrestrial resource chart? It remains a Mystery.

Some days we get lucky and find a really great mystery. This may just be one of them, ya think? Certainly something to think about!

Let's have our coffee in the kitchen this morning. I have some fresh cinnamon rolls with butter to share!
Posted by HermitJim at 12:00 AM

Labels: Map of the Creator

It's the aliens.....again. Or a fantastic hoax.

Now this one is going to take some more looking up. Strange...very, very strange.
Save two cinnamon rolls for me - I'm hungry! 36 and sunny this morning!

There are a number of those mysterious maps around. There's one of Antiartica, but without ice. There's much more to our history than we know.

Wow, this is another great mystery. I think it is ancient aliens. Coffee inside with cinnamon rolls sounds good to me. 30 degrees outside here.

Things must have changed over the years because that map doesn't seem to match the aerial view exactly.

One things for certain, you would have a tough time stuffing that into a back pack.

Great mystery. There are some things that maybe aren't to be figured out, but it is nice to try. Keep'em coming. Coffee definitely inside this morning. Wind chill around 10 degrees. Cools the coffee way to fast!.

Hey Momlady...
Gotta be the Aliens this time for sure!


Hey Phyllis...
Don't you hate it when I make you look things up? Like having homework!


Hey Sixbears...
I was looking at one the other day of Iceland...before all the ice!

Many strange things in our history, for sure!

Thanks, my friend, for coming by today!


Hey Linda...
I'm pleased that you enjoyed the mystery this morning.

I could do a mystery post everyday, just because there are so many of them!

I really appreciate you coming by today!


Hey Dizzy...
Guess the landscape changes every thousand years or so! Still, you have to admit it's interesting!

Thanks, buddy, for stopping in today!


Hey Bob...
Not exactly something you would want to carry around! Although it might make for some good exercise!

Thanks, my friend, for the visit today!


Hey John...
I do love a good mystery, but it would take someone a lot smarter than me to figure this one out!

Makes for some great reading!