A Countess On Mystery Monday...!

Sometimes history is filled with mysterious people! That's right up our alley, right?

Of all the people surrounded by a cloud of mystery, this woman might be at the top of the list...or at least, close to it! 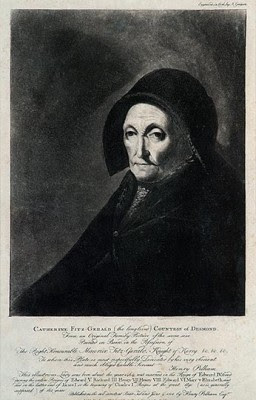 We have all heard of the mysterious Count of St Germain but not many of us are as familiar with the Countess of Desmond as people were in her time. The countess (Katherine Fitzgerald) died in the early 17th century and was reputed to be over 140 years old at the time. No one knows how this mysterious woman lived to such an age but she was very well known- so much so that she is mentioned by both Francis Bacon and Sir Walter Raleigh.

Bacon has this rather bizarre thing to say about her: “They tell a tale of the old countess of Desmond who lived till she was seven score years old, that she did [grow teeth] twice or [three times]; casting her old teeth, and other coming in their place.” Her death is rumored to have been from a fall when climbing a tree to gather nuts – not due to old age. Who this mysterious woman was and how she lived so long has remained a mystery since.

Part of what makes history so interesting is the number of mystery people we know so little about! Always another mystery to research, isn't there?

We better have coffee in the kitchen this morning. A cold front may be coming in, so let's don't take a chance!
Posted by HermitJim at 12:00 AM

Now having a wee bit of Irish blood in me, I just had to look for more info on her. You picked a good one today, Mr. Hermit!
Coffee in the kitchen is fine - I'll bring a chocolate cake for all!

I guess she didn't the FDA,EPA,and Obamacare keeping her healthy?

Sounds like she gave the squirell's a run for the money. Ole Euell Gibbons was right eh.. ok enought nut jokes. Was she ever married? Rainy and cool here, good coffee weather.

Uh hunnerd and forty - Wow! And she was still climbing trees at that age? I've never heard of her before either.

Never heard of her, but I do enjoy Mystery Mondays. Snow flurries here today so definitely coffee inside.

Never heard of her either. Its hard to believe her age and spry enough to climb a tree. Wouldn't scientists have a blast with her.

Picked up some Bisbee Roasters coffee beens at the Street Fair yesterday good coffee on the way My Friend.

She looks a bit grumpy, coffee inside will be great. It is only 25 outside this morning...brrrr.

I just knew you would look her up!

Chocolate cake sure sounds good to me! Thanks!


Hey China...
Probably had a lot to do with her being around so long!

Many thanks, buddy, for coming by this morning! Good to see you!


Hey Momlady...
Glad that you found it so!

Thanks for coming over, my friend!


Hey Randall...
I reckon she might have been one for the record books!

If she was married, it wasn't mentioned in the article. She probably would have outlived her husband(s)!

Thanks for dropping in this morning!


Hey Linda...
I'm glad you enjoy the Monday mystery! I try and find some interesting things to discuss so it's something a little different!


Hey Jo...
I'm thinking she could out-climb me even today!

Thanks, sweetie, for coming over this morning!

A tad chilly here in Houston, but thank goodness we don't often get snow! Just rain, and we needed that!

Many thanks for joining us today!

That's a new one on me. Now I'm going to have to chase that down the rabbit hole and see where it leads.

Hey Sixbears...
Certainly worth learning more about her!

Thanks for coming over, my friend!

I am wondering if maybe her body was producing an extra abundance of human growth hormone. Must have. In a very few people, their internal clock runs slower, or something like that.

The interesting about history is the mankind doesn't learn from it.