There are so many unexplained things here on earth, sometimes we forget that space can hold mysteries that put ours to shame!

With modern tools like the Hubble telescope, we can see and marvel at a few of the majestic sights that await our explanation. 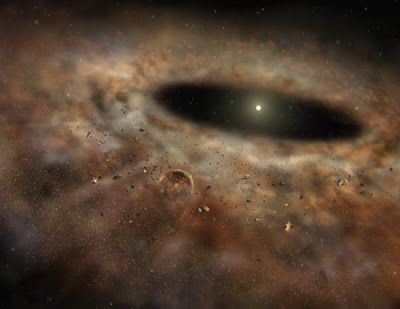 TYC 8241 2652 is located 450 light years away in the constellation Centaurs. It is believed to be around the same size as our sun – but a mere child, at 10 million years old, compared to our 4.5 billion-year-old star. From 1983 to 2008, astronomers searched a bright ring of dust around the star for possible planet formation, believing they were getting some insight into how our own solar system formed. But when the star was due for a check up in early 2009, astronomers were astonished: when they looked through their telescopes, they saw nothing but the star itself. The once-visible, glowing disk of dust was gone. It did not leave behind any planets, or any signs as to where it had gone; it had quite simply vanished. Scientists were baffled. When asked about it, astronomer Carl Melis simply stated, “We don’t have a really satisfactory explanation to address what happened around this star.

Sure does make for a pretty picture, doesn't it? What's more, it makes for a real puzzle for scientist!

Coffee in the kitchen this morning. Kinda cool and damp outside, ya know?
Posted by HermitJim at 12:00 AM

OK - I'll be the first to say it: It's Bush's fault!
Coffee in the kitchen is fine - chilly here 26 and windy. I'll bring pumpkin pie for all!

Its a riddle wrapped in a mystery inside an inigma. No, that was the last Presidential election. No Clue. My coffee's getting cold doing all this cyphering. Cool morning, 1st of many.

Something ate it. Something very very big and hungry.

I love mysteries and I love astronomy, therefore I loved your post today. Now you really got me wondering, I hadn't heard of this, so will have to look into it. As always a great post.

It is a beautiful picture. We'll probably never find out. But maybe we should just accept the fact that not everything in the Universe works as we "feel/expect" it should. Cold and very damp here this morning. My bones are aching.

Hey Phyllis...
That is just way too cold for me to enjoy! I'm a sissy when it comes to cold weather!

Pumpkin pie sure does sound good! Goes great with fresh coffee too!

Thanks so much for coming over this morning!


Hey Randall...
Can't let that coffee get cold, that's for sure! I think that would almost be considered a crime around here!

As far as the stardust goes, I don't think we will ever know what or why some of the objects in space do what they do! Some things are just not ours to know or understand...at least, not yet!

You have a great day, and thanks for coming over this morning!


Hey Sixbears...
Now THAT is a very scary thought!

Meeting something and that hungry could certainly ruin your day!


Hey Dizzy...
I figured this might be right up your alley. If you find out any more information on it, let me know!


Hey Linda...
I think you're right about just accepting it. Sometimes beauty must just be accepted, even if we don't understand it!

I think I know where it went, all over my house! I have never had such a dust problem like recently.
Interesting though.
I am so ready for a good cup of coffee I ground some so I will bring it over. :)

I'm an editor and I've recently worked on several articles about star and galaxy formation. It's so amazing and beautiful.

Hey McKenna...
I have to agree with you 100%! Amazing and beautiful!

We are so blessed to have all this beauty surrounding us!