What a great day when we find a new (to us) specimen in the animal kingdom!

Sometimes it surprises us to know that some of these animals have been around for quite a while. Sort of puts us in our place, to know that we aren't as up to date about our world as we thought we were, doesn't it? 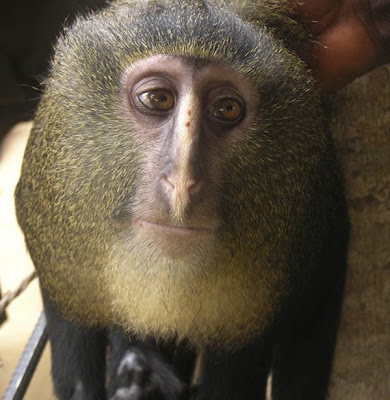 The lesula is a remarkable new species of African monkey discovered in 2007. It was discovered in the Democratic Republic of Congo and is the second new species of African monkey discovered in nearly three decades. The monkey was first seen (by non-locals) in 2007 by John and Terese hart of Yale University’s Peabody Museum of Natural History, in the home of a primary school teacher in the town of Opala. The most visible characteristic which makes the lesula so unusual is its startlingly human face. A slightly less obvious characteristic are the bald patches on the monkey’s hindquarters and genital region, both of which are coloured a vibrant blue.

Ya know, as much as I hate to admit it, this little guy looks a lot like me before I've had my morning coffee. Maybe certain parts of me aren't as colorful, but that's another story!

Coffee in the kitchen this morning. Peppered bacon and toasted home made bread on the side, OK?
Posted by HermitJim at 12:00 AM

It DOES have sort of a jaded expression on its face; doesn't it?

Hey Gorges...
It kinda reminds me of everyone! Most definitely human like expression, I think.

Cute little feller - just imagine what else is out there!
Breakfast sounds wonderful - I'll bring the eggs.

ALWAYS LEARN SOMETHING WHEN I VISIT!!

He looks kinda sad like enough with the pictures already. Or newjersey wholesale what? Yeah if you look up you have been here before dufus! Sorry Jim I hate scammers!!!

Bubba -
He certainly looks human enough, and better looking that some people I know - no names mentioned! Would love some bacon and bread - thanks - I'm cookied out after the company lunch yesterday. Thanks for the new info!

The only part that caught my eye was democratic. He's better looking though! ; ) frosty morm here,coffee and krispy kremes.

Meant morn, not that theres anything wrong with a frosty morm...

It has such a wistful expression on it's face. Very neat.

Oh such a face...bet he would like to play with my kitties. lol

Sorta looks like a fella I used to work with. Maybe there is something to this Darwin thing....NOT!

I used to work for a lady who looked just like that. Maybe she quit dying her hair. ahahah

Boy the scammers are out this morning. Idiots!

Breakfast sounds wonderful and I will bring fresh ground Sumatra to the table.

Hey Phyllis...
I can only imagine what other surprises await us if we take the time to explore!

Fresh eggs...YUM! Hey, thanks for coming by today!


Hey Steve...
Good to see you again, my friend!

Thanks for taking the time to visit!


Hey China...
Yeah, I don't like them much myself! I apologize for not catching them sooner!

Thanks, buddy, for dropping in this morning!


Hey Sis...
Right you are about his looks! Better looking than some!

Bet you are glad the company thing is over for another year!

Many thanks for coming by this morning!


Hey Randall...
Just about frosty here as well! Cold enough to want to stay inside!

Save me a donut! Thanks for coming over today!

Hey, thanks for coming over this morning!


Hey JMD...
I wonder if a kitten would make him smile?

I sure appreciate the visit today!


Hey Sharon...
Looks smarter than some folks I have known.


Hey Jo...
The scammers always seem to show up this time of year!

Who know? Maybe this little guy is related 6to the woman you knew!

Thanks, sweetie, for dropping in today!

What a delightful and informative read...and I think he looks adorable...eyes to die for!..Bit late for brekky however butsounded delicious.

Kinda makes him want to give him a hug!

Hey, thanks for coming over today!

Where in the hell did you find a picture of my brother?

So that is where Uncle Joe has been hiding out. . .