For the end of an old year, I found us an old mystery!

Well, it's really not THAT old, but it will serve for our purpose. At least, this one is almost a mystery within a mystery, as you will see! Best of all, there is an actual photograph! That is pretty cool, don't you think? 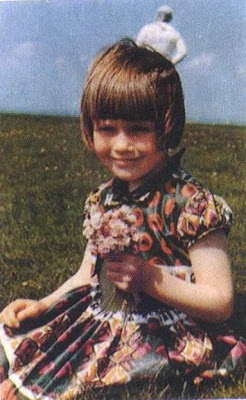 Val Camonica, Italy, is one of the largest valleys of the central Alps, in eastern Lombardy. It is the location of a set of ancient paintings that are believed to depict forgotten deities. The pictures resemble modern day astronauts, despite being painted around 10,000 BC. I can see the resemblance to a space suit, but I am more impressed with the modern day photographic evidence that was captured by the Solway Firth Spaceman photograph. On May 23, 1964, Jim Templeton, a firefighter from Carlisle, Cumberland, took three pictures of his five-year-old daughter while on a day trip to Burgh Marsh, situated near Burgh by Sands and overlooking the Solway Firth in Cumbria, England.

The only other people reported on the marshes that day were a couple of old ladies, and although cows and sheep would have normally been plentiful, they were huddled together at the far end of the marsh. In the second image captured by Templeton, a white figure can be seen in what looks like a space suit. Templeton insists that he did not see the figure until after his photographs were developed, and analysts at Kodak confirmed that the photograph was genuine. To this day, the picture remains unexplained and a source of international fascination. When the picture was taken, in 1964, human space suits were in their extreme infancy. It has been suggested by some people that the figure is merely someone with their back to the camera, perhaps wearing a hat or helmet.

Upon the national release of the photograph, Jim Templeton claimed that he was visited by two men who, he says, came from Her Majesty’s Government. The men tried to make Templeton admit that he had photographed a person, but he refused. In the same time frame that the picture was taken, a Blue Streak missile launch at the Woomera Test Range, using Cumbrian-built weaponry, was aborted because of two large men who were witnessed on the firing range. The technicians reported that the figures resembled the Solway Firth Spaceman. Ufologists have used the photograph as evidence that extraterrestrial life has influenced the modern day space program, including space suits.

This post is a little long, but I figured that with the end of the year being here...we should go out in style! Not to sound like a broken record here, but please...PLEASE, avoid those crazy folks out there that insist on driving after drinking! I value all of my friends very highly, and I don't want to lose any of you!

Coffee in the kitchen this morning. I'm making up some cinnamon toast if you'd like some!
Posted by HermitJim at 12:00 AM

Labels: Last mystery of the year

OK, Mr. Hermit - just spent about 1/2 hour looking up stories on this one - tons of 'em out there. You sure did pick a good one to end 2012.
Just want to say thank you for inviting us into you home all year long. I've 'met' a lot of good people here .... and gained a few pounds eating all the goodies!(sigh)
A Happy, Healthy New Year to you and your family!

A great mystery monday Jim. Solving this one is way above my pay grade but makes for some good coversation. I'm a skeptic by nature but have some un- explainable events (not to this extent) in my own experiences. A phenomenon called "Dual Reality" comes to mind. Probably one real scratch your head moment. Coffee calling!

A good mystery to end the year with. My first thought when I saw the photograph but hadn't read that text was that it was a bee keeprs outfit :-)

Have a great end of this year and a good beginning of the new!
Christer.

Great mystery to end the year with. Kinda looks like a fellow with a motorcycle helmet o . But he's not in proportion with the picture. Anyways, great story. My husband and I never go out on New Years Eve anymore - we don't trust all the other drivers out there. Have a good and safe New Years Eve and a very happy and prosperous 2013. Coffee inside sounds good - too cold outside.

HJ, we always stay at home to avoid the drunks on the road...seems they start early! Have a great day.

I to no longer go out and one of my daughters has decided it isn't worth it anymore. That makes me happy.
I want to thank you for another year of freindship and good coffee and many new freinds made here.

this is a great mystery today. It to me looks like someones back and Christer's thought is a good one.

Good one HJ, as usual. We usually don't stay up to see the new year in. Figure it can get here on its own, but the neighbors sure welcome it in with a bang (and many booms) which keep us awake and my oldest dog shaking.

Always learn something when I visit!!

It's a wonder they did not try and explain it as a ghost after the dad who took the picture said nobody else was around.

Hey Phyllis...
Plenty of sightings on this one. I just love these yet to be explained mysteries, don't you?

I wouldn't worry about the goodies. That's just one of the good things about the holidays!

Thanks so much for being a constant reader!


Hey Sixbears...
Thanks for the kind thoughts this morning!

Be safe out there, my friend!


Hey Randall...
I would imagine that most of us have experienced something we just don't talk about.

I'm glad you enjoyed the mystery today...and I'm with you on not being able to explain it! Better folks than I have tried and failed!


Hey Christer...
Thank you for the good wishes for the new year! I hope that yours is quiet and safe as well!


Hey Linda... I'm glad you liked the mystery today! Seemed like a good one to me!

Can't blame you for not going out tonight! I stay at home myself and keep company with the cats!

Have a safe and pleasant New Year and thanks for coming over!


Hey JMD...
Sounds like many of us think alike!

I really do appreciate you coming over today!


Hey Jo...
Looks like we have almost made it through another year, sweetie! It's sure been a crazy one!

I'm glad that I have friends like you to give me balance throughout my day. It sure does help!

Thanks for being there and for coming over today!


Hey Dizzy...
Animals just don't seem to care much for fireworks at all! Mom is the same way!

The noise should start this afternoon sometimes and carry on through tomorrow! Does every year! Lots of money goes up in smoke, it seems!


Hey Steve...
I'm glad I got a chance to entertain you a tad!

Many thanks for dropping in today!


Hey Duke...
I reckon they knew that explanation just wouldn't fly this time!

Thanks, buddy, for the visit today!

Strange picture. Even if someone were standing behind the girl, he (or she) would have to be standing on something.

Hey Bob...
The picture does make things a bit more interesting, that's for sure!

I sure appreciate you dropping in today!