Nothing like a paradox to make you work the brain a little!

I found a list of some paradoxes over at Listverse.com and thought I would share this one. Just because it's Saturday doesn't mean we should shut down entirely, right? Right! 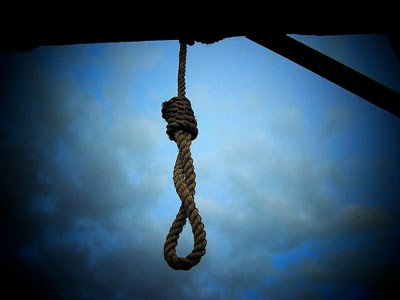 A judge tells a condemned prisoner that he will be hanged at noon on one weekday in the following week, but that the execution will be a surprise to the prisoner. He will not know the day of the hanging until the executioner knocks on his cell door at noon that day. Having reflected on his sentence, the prisoner draws the conclusion that he will escape from the hanging. His reasoning is in several parts. He begins by concluding that the “surprise hanging” can’t be on a Friday, as if he hasn’t been hanged by Thursday, there is only one day left – and so it won’t be a surprise if he’s hanged on a Friday. Since the judge’s sentence stipulated that the hanging would be a surprise to him, he concludes it cannot occur on Friday. He then reasons that the surprise hanging cannot be on Thursday either, because Friday has already been eliminated and if he hasn’t been hanged by Wednesday night, the hanging must occur on Thursday, making a Thursday hanging not a surprise either. By similar reasoning he concludes that the hanging can also not occur on Wednesday, Tuesday or Monday. Joyfully he retires to his cell confident that the hanging will not occur at all. The next week, the executioner knocks on the prisoner’s door at noon on Wednesday — which, despite all the above, will still be an utter surprise to him. Everything the judge said has come true.

If that one doesn't make you think a little, nothing will this morning!

Coffee out on the patio this morning. I'm baking cookies, and we'll share them when they are done!
Posted by HermitJim at 12:00 AM

well since I still have this nasty head cold I can't think much at all. Thought it went away.

But sitting in the warmth of the patio might be good.

I'm sure sorry that the cold came back! I know that you were tired of being sick!

Hope you get to feeling better real soon, sweetie!

Ooooooooooo, what kind of cookies? Is it nice enough out to eat them outside while having coffee?

At 75 degrees on the patio, I think it's warm enough to sit outside!

Hey, thanks for coming by this morning!

How about this morning? I apologize for knocking so late; I've been a bit busy today. Any gingerbread left? No...wait...surprise me. LOL!

No, thank YOU for having such an entertaining and welcoming blog, HermitJim. :)