Another Boat Story For Monday Mystery...!

Ocean mysteries are something we could talk about all day long and never run out of material, ya know?

This one involves an experienced sailor and not just any first timer. Having a couple of 'round the world voyages under his belt already meant that he probably was ready for nearly anything. 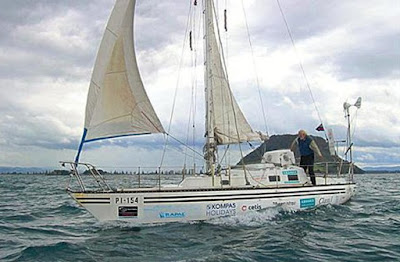 The Lunatic holds the story of Jure Sterk, a 72-year-old man from Slovenia. He wanted to set two records: to be the oldest man to sail nonstop around the world and to do it in the smallest boat without an engine. He was by no means a novice. He had already done a round-the-world trip in 1991 and wrote four books about his adventures.

He took a radio with him on the trip, but soon after New Year’s Day in 2009, he went silent. A passing ship found the Lunatic empty and with heavy storm damage and its emergency boat at the back missing. Jure and this emergency boat were never found.

Seems obvious what happened to the guy, but you just never know. Brave soul to go it alone, though.

Coffee in the kitchen this morning. Storm seems to be brewing outside!
Posted by HermitJim at 12:00 AM

I think I'm with with you on what happened. Stands to reason if the boat was badly damaged what chance could he have in a smaller on, or the he was throw over board and that little skiff was ripped away in the storm. But who knows. Great mystery though

We had a good storm come through here last night.

The ocean is really really big & mother nature has no pity. You have to admire those people with enough passion for their choice to set out knowing the dangers.

I wonder if there would be any story if the sailboat had not been found adrift? There are a great many souls who go out & are never heard from again every year.

Hey Jo...
Yeah, it stands to reason, I think. Of course, we'll never know for sure!
Thanks for dropping in today, sweetie!

Hey Rob...
It's apparent to me that he knew the dangers, but like you said his passion for sailing was just too strong.
Thanks for stopping by today!

Wow really get the mind working don't it.

The oceans are huge and unforgiving. They can swallow a boat and sailor in a blink of an eye to be never seen again. I believe they cover way over 70 percent of the globe. That is a lot of area to get lost in, especially without landmarks.

Something must have scared him to abandon ship. You are almost always better off staying with the boat. That being said, when I abandoned ship the boat broke up in the night. Staying with it would have been the wrong choice. Tough decisions out there.