Sadly, every year there are more and more cases of unsolved crimes committed in the United States, murder is one of them.

Any murder is bad, but when children are involved, it's even worse. Don't you agree? 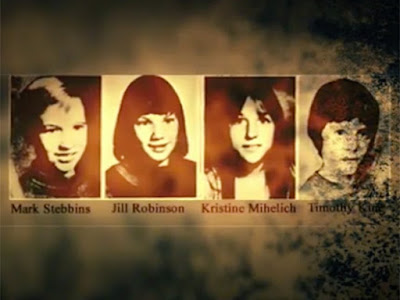 For 13 months between 1976 and 1977, an unnamed serial killer targeted and murdered at least four children—if not more. Dubbed the Oakland County Child Killer, this person was responsible for the grisly deaths of Mark Stebbins, 12; Jill Robinson, 12; Kristine Mihelich, 10; and Timothy King, 11. At least two of the murders included sexual assault.

Timothy King’s parents turned to the media. His father appeared on television to beg for his son’s safe return during his disappearance. His mother wrote a letter to the Detroit News and promised to serve him his favorite meal, Kentucky Fried Chicken, when he came home.

His body was found in a shallow ditch six days later. His skateboard, which he had been using when he went missing, was placed beside him. His clothes were neatly pressed and washed, and the worst part—postmortem analysis showed that Timothy had eaten fried chicken shortly before he was murdered.

The murderer was never found.

One thing that caught my eye right off is that the last child had the same last name as I do. Spooky!

Coffee out on the patio where it's nice and cool again today!
Posted by HermitJim at 12:00 AM

These killers are so very sick and when they aren't even caught is more the reason for nightmares. Can't even imagine what the parents went through or these kids

Some day I hope these murders are solved. I feel so bad for the parents. What kind of sicko goes after children.

Hey Jo...
Nightmare without end, I'm afraid.
Thanks, sweetie, for stopping by today!


Hey Linda...
I doubt they will ever be solved.Pretty sad really.
Thanks for coming over this morning!

If some one as bad as that is caught, he should be turned over to the parents and grandparents to do their thing to him. Now that would be real justice.

Hey Dizzy...
Yep, I think that would take care of things fairly.
Thanks for coming over today!

Those serial killers always creep me out. Can't understand why so many killer movies are made for entertainment. I avoid them.