Our Tax Dollars At Work...!

Ever wonder just how the government can get in so much debt year after year? This might help to explain some of it. 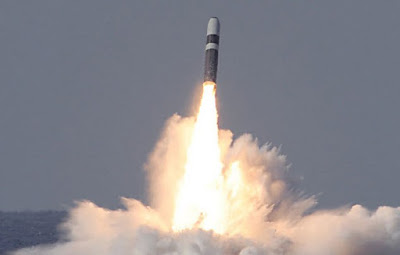 We can all breathe a sigh of relief that this weapon system has never been used, although it costs a great deal of money to develop and maintain. The various forms of the Trident missile were developed as submarine-launched ballistic missiles, capable of carrying multiple independently targetable reentry vehicles, also known as nuclear warheads.

Trident missiles are carried by the US Navy as well as the UK’s Royal Navy at a total estimated cost of $40 billion in 2011, with an estimated cost of $70 million per missile. The Trident missile program has been in operation and development since 1979 and is planned to remain in service until 2042. The estimated total program cost is $170.2 billion, but with any luck, the missiles will never be used.

I know we have to spend a lot to defend our country, but I wonder just how much good we are actually getting out of our taxes. Want to see more of our spending cost, then just take a look right here!

Cold front came in last night, so it's coffee in the kitchen.
Posted by HermitJim at 12:00 AM

And the money just keeps flying out the windows. Hey but aren't we on SS getting a whopping $5 raise next year.

I guess this cold front is really pushing it's way across the Nation. Where sitting here in from of the little heater in the computer room. Nice warm kitchen sounds good to me.

it is disturbing to hear social security recipients and honestly disabled people denigrated because of benefits received when you see the waste from the government.
foreign aid is one big corrupt scheme, with the actual aid going only to politicians' secret accounts and little or few improvements effected on the ground.

Hey Jo...
Getting harder and harder to keep up with the groceries on what we are making.
Feeling pretty snug in the kitchen this morning!
Thanks, sweetie, for stopping by this morning!


Hey Deborah...
You are so right about that, my friend.
Thanks for coming over today!

Don't look at the projected costs of the F-35 fighter. Billions over budget and the plane still can't fight.

He who has the biggest stick or club wins, but big sticks and clubs cost a lot of money. There job is not to attack, but to prevent being attacked.

Hey Sixbears...
Kinda makes ya wonder, doesn't it?
Thanks for dropping by today!


Hey Dizzy...
Never-ending threat, I guess.
Thanks for the visit today!