Sometimes we lose sight of the fact that some our really early ancestors were a lot smarter than we gave them credit for.

Take the craft of sewing, for instance. For the longest time, not much thought was given to how long that particular craft has been around. This story from Listverse may just change your mind. 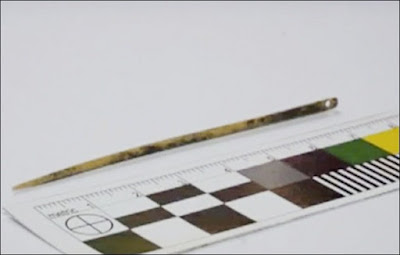 Archaeologists recently unearthed the world’s oldest sewing needle in Siberia’s Altai Mountains. The 50,000-year-old needle was discovered in Denisova Cave and was used by non-Homo sapiens. The 7-centimeter (2.8 in) needle contains a hole for thread and was made from the bone of a large, unidentified bird. Researchers had previously found needles in later cave layers, but this is the oldest and longest one yet discovered.

This needle predates the previous earliest-known specimen by 40,000 years. It was discovered in the same layer as our mysterious hominid cousins, the Denisovans, who were named after the cave. The Denisovans were more technologically advanced than Neanderthals. A precise hole in a Denisovan bracelet could only have been accomplished with a high-rotation drill similar to those used today.

Sounds to me as though a lot of mistaken ideas have been held by folks thinking the early ancestors were slow witted and clumsy. We may have to rethink that a bit, ya know?

Coffee out on the patio once again. Rain is not due until tomorrow morning!
Posted by HermitJim at 12:00 AM

Great post this is very interesting indeed. Love this kind of stuff. I always new these folks had to be smarter than given credit for.

Very 1nteresting. I have been following your blog for a couple of years now and have always enjoyed it. I really like the cartoons. I have just started a blog. I don't think it will be as interesting as yours. It's is just about homesteading stuff that my wife and I do. The question I have is how do I get followers. I'm leaving the address to the blog here. I wood like very much for you to check it out and give me you thoughts http://twocedarsmicrofarm.blogspot.com

Hey Gorges...
Glad you found it so, buddy!
Thanks for stopping by today!


Hey Jo...
It is kinda interesting, isn't it? We don't think of them doing things like sewing, but apparently they did. Had to have something to wear, I reckon.
Thanks for dropping by, sweetie!


Hey David...
Glad that you enjoy the blog, sir. As far as getting followers, the best advice I can give is to start following other blogs and commenting on them. Be consistent, but not pushy. Folks usually respond better if you stay regular, ya know?
Make it easy to comment on your blog. I tried to leave a comment today, but was unable to do so.

Eventually, the followers will show up. It just takes time. Thanks for stopping by today!

Thanks Mr. Hermit. I think I got the comment thing fixed. Please fell free to stop by any time . Any advice you may have is surly appreciated

The only advantage modern man has over them is that we have had thousands of years of information to build on. We may not be smarter, just more info at our fingertips.