It's a wonder to me that the human species has made it this far, what with all the lack of common sense decisions we've made over the years.

Perhaps this article will help to show exactly what I mean. I can only shake my head and mutter "WTF" when I read about something like this, ya know?


Take The Family To Watch A Nuclear Bomb Explode 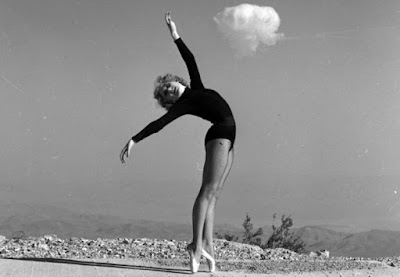 In the 1950s, the United States had a Cold War to win, and the only way they knew to do it was blast the Nevada desert with nuclear tests.

You’d think people would have tried to steer clear of a nuclear test site, but it was actually the exact opposite. Casinos in Las Vegas capitalized on it and sold tickets. People around the country flocked out to their “dawn parties,” where gamblers would play until the night sky lit up with an atomic blast 121 kilometers (75 mi) away.

It was the biggest tourism boom Las Vegas had ever experienced. They worked into it every way they could, selling Atomic Cocktails and holding beauty contests to crown Miss Atomic Blast. Sure, thousands of people got radiation poisoning, and 1.6 trillion gallons of water were contaminated, but it was a great party.

I have to wonder if any family groups started glowing in the dark after the "nuclear vacation?" I got this article from over at Listverse, just so you'll know.

I think it's the same impulse that brings spectators to major fires. When I was a firefighter I saw spectators struggle to get past the police so they could get a closer view -and then end up in the hospital with smoke inhalation. I was wearing my air pack and they couldn't figure out it might be a problem.

Sometimes I weep for the species.

Remember that old movie with Mickey Rooney - The Atomic Kid? Maybe they thought they would be like him.

I wonder also about how people think. Makes you wonder how many of these people got cancer and how many babies were born with birth defects.

Hey Sixbears...
One of the main things we lack , it seems, is common sense.
Thanks for stopping by today!


Hey Phyllis...
I do remember that movie, but it's been years since I thought of it.
Thanks for coming over today!


Hey Jo...
From what the article said, many folks did get sick and water did get polluted. Sad case if you ask me.
Thanks, sweetie, for dropping by this morning!

I worked two and half years at a place that made nuclear fuel and components. Got a real education on radiation. And no, I didn't glow in the dark. I would turn the lights out while looking in a mirror to check (grin).