Sometimes we forget that there are many ancient archeological wonders right here in the United States. This is one of those wonderful mysteries you may appreciate. 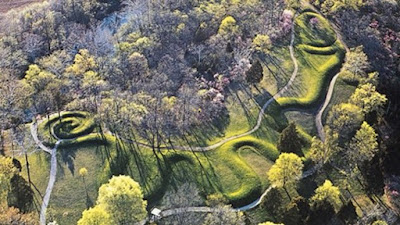 The Great Serpent Mound is an ancient earthwork discovered in Ohio. It’s an effigy mound, which is a mound in the form of an animal, in this case a giant snake. Archaeologists have been unable to figure out what culture built it, when it was built, or what its use was. Radiocarbon dating has suggested that the mound may have been built around AD 1000, while other studies have suggested it could be around 2,000 years old.

There are a number of theories as to what the effigy was used for. Some scholars believe it was used in religious ceremonies and possibly sacrificial offerings. Others believe it is some sort of calendar, due to its astrological alignments.

The main question I want to ask is...how has it lasted for so long without being plowed under?

Coffee out on the patio this morning, I think.
Posted by HermitJim at 12:00 AM

We have some of those "effigy mounds" here in Wisconsin also. Some are in State Parks and others are in Historical Landmarks areas. I am glad they are being preserved. To me it seems the reason they haven't been plowed under is because they actually are mounds and it would take too much effort to plow them flat.

The spirits that reside within would not be pleased to be disturbed.

Ancients really did some remarkable things with only man power. The shape is really perfect. I'm trying to figure out if the mouth is open and it seems to be eating something or is the head rounded.

Hey Linda...
Whatever the reason, I'm glad they are still around!
Thanks for stopping by today!


Hey Momlady...
Wouldn't be a good thing to disturb them, I reckon!
Thanks for coming by this morning!


Heu Jo...
They did some remarkable work, that's for sure.
Thanks for dropping by, sweetie!

A lot of the sites have been plowed under, sad to say. There are old mounds and stoneworks all across the country. Many are kept secret from the general public so as not to get destroyed.

When I was a boy growing up in Pennsylvania, we spent a lot of time at our family camp. There were mounds scattered thru the woods and the adults would tell us kids that an Indian was buried in each one and not to dig them up because there would be a curse put on you. Then, a little later on, I realized it was left after a fallen tree rotted away and the root system had pulled up a mound of dirt. Still, I never dug one up to be sure. . .

Hey Sixbears...
I figured that some locations were kept secret to help preserve them. Some folks just have to destroy things for no purpose.
Thanks for coming over today!


Hey Dizzy...
Yeah, some things are best when they are unknown Glad yo didn't dig up any to be sure!
Thanks for the visit today!

wish i had a map and pictures of all of them. are there any in canada or in other parts of the world?
didn't know about wisconsin. thought they were all eastern.