How many stories of ghost ships or planes do we hear? A lot...!

This one is different because the ghost vehicle was a blimp, but because it was repaired and used again. Strange, right? 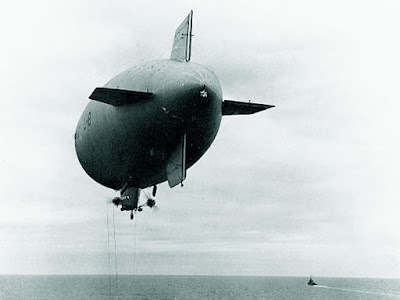 Nothing seemed out of the ordinary on August 16, 1942 when Lieutenant Ernest Cody and Ensign Charles Adams took flight aboard Navy blimp L-8 in search of Japanese submarines off the coast of San Francisco. Shortly after their departure, however, they spotted an oil slick near the Farallon Islands. Such slicks could mean a submarine lurked beneath the waters. The men decided to investigate, radioing just once during their flight. A few hours later, the blimp had drifted inland. It sideswiped a house in Daly City before crashing down … with no one inside. Nothing was found to be wrong with the blimp’s radio or the engine, and none of the lifeboats or parachutes were missing. The blimp was repaired and continued to fly without incident until 1982. As for Cody and Adams? They were never heard from again.

I don't think this could happen in this day and age, what with all the radar and such at our disposal. I do think it's a bit strange that these two men were never heard from again, though. Freaky!

That is freaky! Now you have me thinking about what happened to them. Have a good weekend.

Aliens, it's aliens I tell ya!

Remember that distinctive sound blimps made? As kids we would always run outside when we heard one! It's a sound that's never forgotten!

Yes I would call that strange indeed. And the blimp returned home all by itself.

I sure hope it's warmer on your patio than it is here. It's 31 degrees this morning. Fred and I are sitting in front of the fake wood burning stove with heater going hahaha

Hey Linda...
Does make for a real mystery, doesn't it? Unless, of course, the Navy knows more than they are saying.
Thanks for stopping by today!


Hey Momlady...
Does seem like a likely solution, for sure.
Thanks for coming over today!


Hey Phyllis...
Bet that was exciting back then. Don't remember the sound myself, I'm afraid. Too long living in the city, I reckon.
Thanks for the visit this morning!


Hey Jo...
74 on the patio right now, sweetie.
Thanks for dropping by today!

There's a lot of space out there over the ocean. No telling what can happen.

I know the guy that used to pilot the Good Year Blimp that was hangered north of Houston. He said that he really enjoyed his job.