No matter how you count it, 60 lbs. is a lot of coins, silver spoons, and another 200 assorted gold items. Hey, it all adds up, ya know? 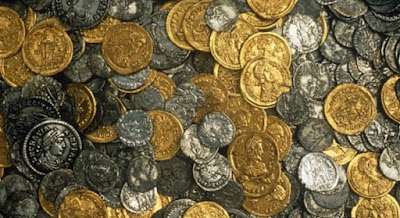 When his metal detector buzzed a Suffolk field in 1992, Eric Lawes was looking for a hammer, not lost treasure. After he picked up a signal that led to gold and silver pieces, Lawes called the authorities. At nearly 27 kilograms (60 lb), the precious metals represented the biggest Roman cache found in British soil.

One of only 40 hoards ever discovered, it contained 15,234 coins, dozens of silver spoons, and 200 gold items. The so-called Hoxne Hoard is priceless to researchers. Most of it was excavated within the original context, unlike most troves that are run over by farming equipment. This allowed valuable insights into the owners’ lives.

Experts cannot agree on the Hoxne treasure’s age but believe it was buried around the time that Roman citizens in Britain were abandoned by their failing empire in AD 410. Violent invasions from other groups increased and may have been behind the family’s decision to hide their wealth in the ground.

I took this article from the folks over at Listverse. I have to say, that seems like a pretty good find to me.

Coffee in the kitchen once again.
Posted by HermitJim at 12:00 AM

Wow...I'd say that was a good find in anyone's opinion:))

Sure wish I could dig in my yard and find a treasure. That was quite the find.

I guess they didn't have coffee cans back then.

Hey Mamahen...
I have to agree with ya on that!
Thanks for stopping by this morning!


Hey Linda...
It would be nice, wouldn't it?
Thanks for coming by this morning!


Hey Bigfoot...
I wonder what they did use, now that you mention it.
Thanks for the visit today!

Like the others why can't I find even just a little bit and I would be happy. Oh well just isn't to be and as long as I have a roof and food I'm happy.

Nice morning here and we stayed just under 100 yesterday, but not going to be that lucky today. Kitchen is good

Hey Jo...
Wouldn't take a lot of that kind of find to put a smile on my face.
Thanks, dear, for dropping by this morning!

Seems you're the only one still posting regularly, Bubba, so thanks to you and Listverse for all the good stuff. I'll try to be more diligent in responding so you don't think about quitting, too!

Hey Sis...
I have to admit that lately, I considered stopping altogether. Still, I reckon the folks I follow have their own reasons for not posting anymore. I'll stick around for awhile longer, I guess.
Thanks so much for the visit today, Sis!

There's a man who will never need to make change again.

Hey Ashley...
I should hope not! Wonder what his government let him keep?
Thanks for stopping by today!