Here is a little story from Listverse that can be the feel good story of the day. It's all about a pup named Fido. 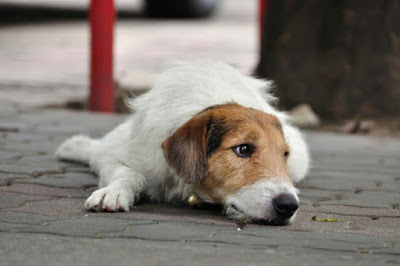 There are plenty of stories of dogs who stood vigil for dead masters for years afterward. Among the most well-known loyal dogs were Hachiko, from Japan, and Greyfriars Bobby, from Scotland. Hachiko and Greyfriars Bobby have had numerous books and even films made about them. But the loyal dog who was most famous during his own lifetime is probably the least well-known. Fido was born in Italy sometime during World War II. He was found on the verge of death by a kiln worker who took him home and nursed him back to health. And for this, he’d have Fido’s unwavering loyalty for the rest of his life. Every day, Fido waited for his master at the same bus stop, refusing to move until he stepped off the bus—and this at a time when Italy was being bombed almost daily. But one day, Fido’s master didn’t return. He’d been killed in an air raid while at work. Fido, ever vigilant, still turned up to wait for him. Every day. For 14 years.

His tale spread across Italy until Fido became a constant source of media attention, both during the war and long after it ended. Surviving footage shows that huge crowds would turn up to watch him make his way to the bus stop every day, watch everyone get off, then walk away disappointed when the bus pulled off. He received honors and medals, but all he wanted was for his friend to come home. He never did. Don’t worry—it’s okay to cry.

OK...enough with the dog story this hot morning. Let's move on, shall we?

Coffee in the kitchen, where it's cooler than the patio.
Posted by HermitJim at 12:00 AM

I must admit, my eyes teared up a bit. I have loved and lost too many pups in my lifetime, and the most recent is still hard to live without.

Hey Dizzy...
It's always sad to lose a pet, especially when they seem a part of the family!
Thanks for stopping by this morning!

It is already hot here at 7am back into triple digits for us too. Fast cup this morning Sunday breakfast with daughter

Hey Mamahen...
Pets are faithful , almost to a fault.
Thanks for coming by this morning!


Hey Jo...
Kinda heartbreaking, isn't it? I think it's great that you two go out for breakfast together.
Thanks, dear, for dropping by today!

This story always makes me cry.

Hey Ashley...
Yeah, it kinda got me too.
Thanks for the visit this morning!