Well, he probably isn't remembered by many of us today, but he was quite famous in his day. He had a very unusual occupation, you see. Here is his story. 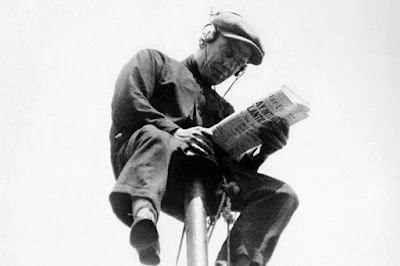 Alvin Kelly was a stuntman who decided in 1924 to climb a flagpole and sit on it to promote a nearby Hollywood theater. He stayed there for an amazing 13 hours and 13 minutes, launching a fad that required him to repeatedly break his own record. His final victory was a seemingly impossible 49 days.

Kelly kept his balance by placing his feet in stirrups while he was perched upon his seat, which was 33 centimeters (13 in) wide. He consumed only liquid nourishment and urinated through a tube in his pants, which directed the stream down the pole to the ground below. The stunt earned him $100 per hour for six years until the fad died out at the onset of the Great Depression.

It may have been a strange job, but it seemed to pay pretty well. That was a lot of money back in those days, for sure!

I can't imagine sitting in one place that long. Wow! I'll see everyone in the kitchen, but I won't be breaking any records:))

No way could I ever sit in one place for that long. Can't believe he made that much money, that was a fortune back then. See you in the kitchen.

Better him than me.

Bad place to be during a thunder storm!

Hey Mamahen...
Does sound like a long time, doesn't it?
Thanks for stopping by this morning!


Hey Linda...
You're right...it does sound like a lot of money. I wonder if it was worth it?
Thanks for coming over this morning!


Hey Momlady...
I hear ya on that!
Thanks for the visit today!


Hey Gorges...
I reckon that's right, for sure.
Thanks for stopping by today!

I bet he lived a good life on the money from that stunt. Of course with the depression maybe not. I wouldn't last more than a few minutes if I would even go up there in the first place.

Kitchen time it is

Is almost Fall yet!

Hey Jo...
I don't think I would even go up there to begin with. I don't like heights.
Thanks for dropping by today, sweetie!

I don't like heights either, Bubba, but for $100/hr, even today, much less the rates from then to now, I might be tempted. For now, though, I'll stick in the kitchen with ya - save my usual seat, please.

Hey Sis...
The money might be reason enough to go up the flagpole, but to stay up that long...I think I'd have to pass.
I appreciate you stopping by today!