Mother Nature has instilled a few of her critters with some rather aggressive attitudes when protecting their nest and young. Sometimes this can be more than a little dangerous for folks not meaning any harm. That turned out to be the case with a couple of swans in Austria. 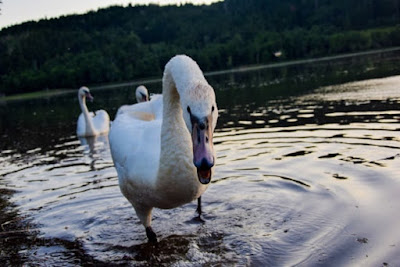 A gay swan couple had to be forcibly removed from a lake in Austria after they launched several violent attacks to protect their nest from pesky humans.

Most people know that wild animals tend to behave more aggressively when they have young to care for. They also know that swans, in general, tend to be antagonistic jerks. The residents of Grundlsee took this into account when dealing with a pair of local swans, but they finally said “enough is enough” and had the animals relocated.

The waterfowl began their attacks last summer, targeting people and boats that got too close to their nest. They became far more aggressive this year, though, with several people requiring hospital care. The most dangerous attacks occurred when the swans jumped onto swimmers and tried to keep them underwater. Mayor Franz Steinegger decided to act before tragedy struck and enlisted the help of wildlife expert Alexander Groder to remove the birds from the lake.

After they were captured, we learned two interesting things. Both swans are males, and the valuable cargo they were protecting wasn’t eggs or cygnets. It was a colored plastic cup.

The swans now live in a special pond in Tyrol. Groder believes that their atypical relationship could have been a source of their extreme aggression, as one of the males was likely strongly suppressed by the other.

I sorta feel bad for the swans. After all, they were only protecting what they considered to be an unwanted move into their nesting area. Far better for the swans to be relocated (along with their plastic cup) than to have them killed.

Coffee inside again...due to the heat.
Posted by HermitJim at 12:00 AM

Hey Gorges...
I always thought that geese were aggressive, but I never thought that about swans.
Thanks for stopping by today!

Gay swans? That's a new one.

Hey Momlady...
Pretty strange, don't you think?
Thanks for coming over this morning!

Yes they can be very aggressive and nasty, since they are so beautiful and look so calm no one thinks how mean they can be. Poor things I'm glad they just relocated them.

We are still lucky to have some really nice early mornings so I can open some windows and the door for recycling the air.

Hey Jo...
I have to admit, they are pretty to look at. More rain heading our way.
Thanks, dear, for dropping by this morning!

I never heard of gay swans. It's a good thing they weren't here in Ohio. One of the lakes hubby n I like to visit had swans, that nested and had young ones. Locals complained that they were messing up the ecology in the area, so the park authorities had them all killed :(

Hey Mamahen...
I can't see how swans could mess up the ecology, but what do I know?
Thanks for the visit today!

Hope the Baby cup was relocated along with them