Here is another part of our history that somehow got left out of the history books in school. I reckon that is because the information is in no way pleasant. 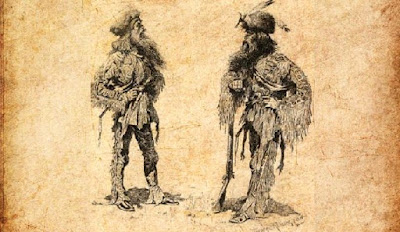 The Harpe Brothers are often referred to as America’s first true serial killers. Regardless of the assessments factuality, Micajah (“Big Harpe”) and Wiley (“Little Harpe”) left an endless trail of mutilated corpses throughout Kentucky and Tennessee, casting fear in the hearts of frontier families. They murdered not for financial gain, but for the love of the sport. Their lust for death proved even too much for fellow outlaws to bear, casting the brothers out of the Cave-in-Rock territory. Nevertheless, they continued their murderous spree of torture and disembowelment, with no discrimination pertaining to age, gender, or race. No one was spared. Their victim count is estimated to be between 25 to 50, although the actual number has never been known.

Big Harpe met his end from the blade of a tomahawk in July 1799. Subsequently, he was decapitated, and his head was fixed to a tree where it remained for ten years. Little Harpe escaped authorities and later joined the forces of Samuel Mason’s gang. After beheading Mason, Little Harpe strolled into town with the intention to claim his rightful reward only to be immediately recognized by officials. Consequently, Little Harpe was arrested and hanged in 1804.

I can see why these two were not mentioned in the books, although I do wonder if not teaching the bad history as well as the good is a good thing. What do you think?

I had never heard of them until I saw a documentary on Discovery ID's "Evil Kin" show. Yikes! Not quite in the Sawney Bean class, but hey, we were still a young country...........

History is history. Good or bad. We need to see it all.IMHO

Hey Taminator...
There were some rough characters around, even back then.
Thanks for stopping by today!


Hey Momlady...
Yep! True that!
Thanks for coming over this morning!


Hey Bigfoot...
I agree with that 100%.
Thanks for the visit this morning!

I agree with Bigfoot...history is history...youcantry to remove all the reminders, but you can't change the facts.

Hey Mamahen...
I feel as though we should try and learn from history, just to be sure we don't repeat the bad.
Thanks, my friend, for stopping in today!