Now here is a little mystery that you can ponder on. This story came from my friends over at Listverse (of course). 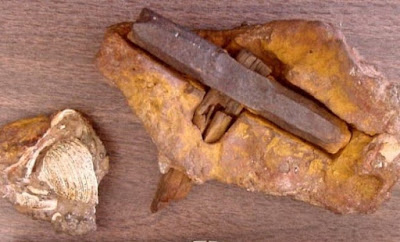 In the middle of 1934, Max Hahn, a resident of London, Texas, discovered an odd-looking rock on a ledge beside a waterfall. The rock was apparently very happy to see him, judging by the piece of wood protruding from it. Max took it back to introduce it to his family, and being the curious kind of folk they were, they cracked the rock open with a hammer and a chisel. Much to their surprise, the rock was hiding part of an old hammer inside. They filed into one of the beveled sides of the hammerhead to ensure that it was made of metal. It was.

When the rock was cracked open, the metal hammerhead was exposed to the light of day for the first time since the rock formed around it. The problem is that the rock is purported to be up to 400 million years old. Humans aren’t supposed to have evolved until hundreds of millions years later. One explanation is that the mineral concretion around the hammer itself is not 400 million years old, regardless of the age of the area it was found. Others, however, tout the London Hammer as supporting evidence for creationism.

I find this pretty interesting, especially since the rock was found in Texas. Strange, but interesting.

Coffee in the dry kitchen this morning.
Posted by HermitJim at 12:00 AM

The wooden handle could be dated by carbon 14 testing & I'll admit that I don't really understand what this has to do with creationism...

There have been other objects found in rocks, coal & such that leave me scratching my head.

This story was a good find!

That really in interesting. A good one for some of those shows on TV. Great story for this morning.

Hmmmmm. Something to ponder indeed.

Hey Rob...
Stories and finds like this are a puzzlement for sure.
Thanks for stopping by today!


Hey Linda...
It does make for a good mystery, that's for sure!
Thanks for coming by this morning!


Hey Momlady...
Always some food for thought at the Hermit's.
Thanks for the visit this morning!

Well now this is a good mystery this Monday morning. Mother nature can surely find ways to make life interesting.

That is quite interesting! It is pleasant here this morning, although it is suppose to get hot this afternoon. Coffee in your kitchen is always nice too:))

Hey Jo...
I hope that all our lives can be this interesting, don't you?
Thanks for dropping by today, dear!


Hey Mamahen...
Glad you are having a pleasant morning. More rain seems to be headed our way.
I appreciate you coming over to visit this morning!