Anyone that has been chased by a goose knows just how scary this fowl can be. Now imagine that nightmare made BIG!


Garganornis
The Big Angry Goose That Used Its Wings To Fight 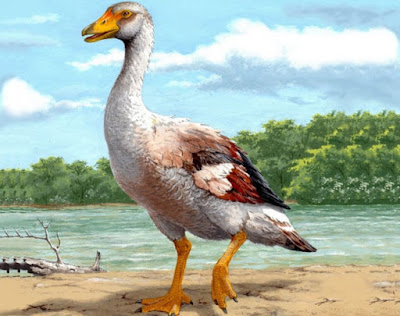 In ancient Italy, there was once a giant goose called the Garganornis ballmanni—and if you’ve ever been chased by a modern goose, you’ll understand why this was a creature worth being afraid of.
Posted by HermitJim at 12:00 AM

Oh my, my phobia of birds would have kicked in just looking at this creature! See you in the kitchen. No birds please:))

Hey Mamahen...
Must have been a fearsome sight for sure!
Thanks for stopping by this morning!

It was something different to know about the goose. It looks calm...

I have been chased by an angry goose. This one is worthy of avoiding at any cost.

I am not fond of geese, except to eat...maybe.

Hey WW...
I reckon that looks can be deceiving, don't you think?
Thanks for the visit this morning!


Hey Linda...
Good thing they are extinct now. I don't want to have to worry about one chasing me.
Thanks for stopping by this morning!


Hey Momlady...
I can only imagine the drumstick on this bad boy!
Thank you so much for coming over this morning!

That is something you wouldn't want around today at parks with ponds.

I'll enjoy the kitchen with everyone. The temps here aren't bad until the humidity matches and it is matching right now.