Man can train many animals to serve them, mainly in hunting and such. How about training Eagles to take out drones? Pretty wild, huh? 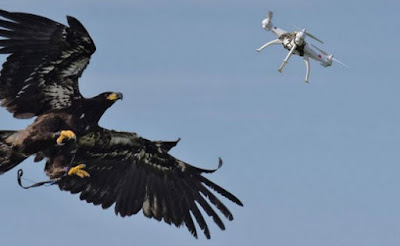 Even though these bald eagles were trained to do this, it’s still a very new and unusual behavior. The Dutch national police trained a troop of bald eagles to identify potentially dangerous mini drones in the airspace and, instead of steering clear of them, grab the drones in their talons and take them out of the sky.[8] This is an amazing example of how adaptable and intelligent these massive birds of prey really are. Capturing and relocating the drones is similar to their natural ability to catch prey and take it back to their nest. But what’s remarkable is that they can overcome any fear they might have of man-made technology.

I don't understand just how they know if the drone is a friend or foe, but I reckon the police have a way of letting them know.

That is a clever idea. I think we should adapt it here. Have a great weekend.

Ingenious or downright scary - not sure which ~

Hey Linda...
I would hate to think we ad that many unfriendly drones flying around our skies, ya know?
Thanks for stopping by today!


Hey Sis...
I'd say impressive and that should cover it all, I reckon.
Thanks for coming over today!

I wonder if those eagles are disappointed that they are unable to eat it?

Hey Dizzy...
I would hope that they are rewarded with a healthy treat after they bring down the drone. Maybe a steak?
Thanks for the visit this morning!

That is amazing! See everyone in the kitchen:))

I don't know if anyone noticed but that is not a Bald Eagle. Or maybe it's shadowed that makes his head look brown. But it is amazing how they can be trained to pull down the drones.