There are so many strange and marvelous unknowns in nature that, try as we may, we just can't figure them out. Here from Listverse is a good example of one. 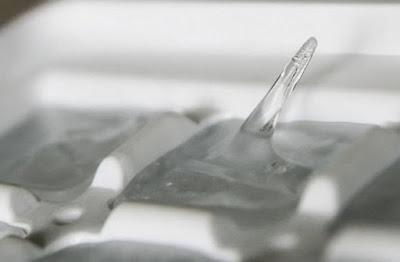 The Mpemba effect has blown educated minds throughout history, including Aristotle and Francis Bacon. They observed what seemed like a freak of nature—that hot water freezes faster.

This phenomenon was named after Erasto Mpemba, a Tanzanian high school student, whose studies confirmed the ancient thinkers’ observations in 1963. He showed that the effect happens when hot and cold bowls were left in identical subzero temperatures and the warm water turned to ice first.

There are several theories to explain this madness. In the 1980s, Polish physicists attempted (and failed) to prove that warmer water might have less heat-retaining gas. A more likely reason could be that when hot water steams, evaporation reduces the mass that needs to be cooled.

Another factor might be warm water’s coolest point. In a container, cold liquid sinks to the bottom and pushes the hottest layer to the surface. This creates a current that speeds up freezing. However, the precise process that enables hot water to chill quicker than its colder cousin remains a mystery.

I find this interesting and have no idea of the science behind it. I figure that it's just one more way Mother Nature has to confuse us.

Coffee in the kitchen this morning. Lemon creme cookies anyone?
Posted by HermitJim at 12:00 AM

I have wondered about this in the past. Just make no sense to me lol. I'll have a cookie, thank you:))

And cold water will come to a boil faster than warm/hot water. One of those things called darned if I know.

So to change the physical state of water (from a liquid to either a gas, boiling or a solid, ice) it's quicker if you start at the far end of the spectrum.
After some thought I've no idea at all why that might be.... but it is darned interesting!

It's a fine morning for a lemon creme cookie, thank you!

Hey Mamahen...
Like I said, Ma Nature just keeping us in the dark. She's pretty good at that.
Thanks for stopping by this morning!


Hey Momlady...
That's a pretty good name for it, I reckon.
Thanks for coming over today!


Hey Rob...
Interesting for sure. Nothing like a good mystery from nature, huh?
Thanks for the visit today!

I had known about this for some time but the idea was that it made the freezer run harder but I'm not sure that's right at all. Mother Nature will only let you figure it out if she wants you too.

Lemon cream cookies? I'm on my way, don't think I have ever had one before

Hey Jo...
Nature does enjoy her little secrets.
Thanks, dear, for dropping by this morning!

I like the convection hypothesis... the molecules in hot water are moving faster, and therefore more of them come into contact with the cold air to transfer their heat. Still, that one seems flimsy. I'll bet the real explanation isn't anything so obvious. Water is a really weird molecule.