Another Ghost Story For Saturday...!

When I was younger, my sisters and I loved to watch the scary movies on Saturday night television. Of course, they weren't filled with all the blood and gore that today's films seem to be cursed with. Fun days, for the most part!

Here is a story that could have been in a movie at that time. Weird and a little scary at the same time. 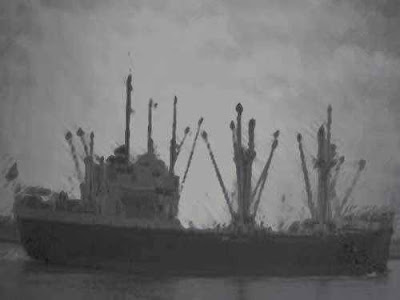 Ghostship6In February, 1948, distress calls were picked up by numerous ships near Indonesia, from the Dutch freighter SS Ourang Medan. The chilling message was, “All officers including captain are dead lying in chartroom and bridge. Possibly whole crew dead.” This message was followed by indecipherable Morse code then one final grisly message… “I die.” When the first rescue vessel arrived on the scene a few hours later, they tried to hail the Ourang Medan but there was no response. A boarding party was sent to the ship and what they found was a frightening sight that has made the Ourang Medan one of the strangest and scariest ghost ship stories of all time.

All the crew and officers of the Ourang Medan were dead, their eyes open, faces looking towards the sun, arms outstretched and a look of terror on their faces. Even the ship’s dog was dead, found snarling at some unseen enemy. When nearing the bodies in the boiler room, the rescue crew felt a chill, though the temperature was near 110°F. The decision was made to tow the ship back to port, but before they could get underway, smoke began rolling up from the hull. The rescue crew left the ship and barely had time to cut the tow lines before the Ourang Medan exploded and sank.

To this day, the exact fate of the Ourang Medan and her crew remains a mystery.

Coffee out on the patio for a change.
Posted by HermitJim at 12:00 AM

it's okay. post away.
at my age i enjoy the same story over again because i can't remen it or else have a vague recollection and like to rehear how it ended.

Those aliens sure were busy.

Wow! That would make a good creep night movie! I'll see you all on the patio:))

Even the dog.... I think Momlady has it right!

I love these creepy mysteries and I don't remember reading about it before. But I think a few of us are in the same boat CRS

Our nice mornings here are over already 88 here and muggy. See you on the patio.

Hey Deborah...
I can appreciate that.
Thanks for stopping by this morning!


Hey Gorges...
Yes sir, that it is.
Thanks for coming over this morning!


Hey Momlady...
Sure does seem like it.
Thanks for the visit today!


Hey Mamahen...
Sure makes it a good candidate.
Thanks for stopping by this morning!


Hey Rob...
Yes sir...even the dog. Totally heartless.
Thanks for coming over today!

Hey Jo...
I just don't want to repeat myself too much, ya know?
Thanks for dropping by today, dear!