Many things about the past in Egypt hold a fascination for us. The country has managed to hold on to many secrets for a very long time. Here is one mystery about an Queen, whose identity is yet unknown.


The Unknown Queen Of Egypt 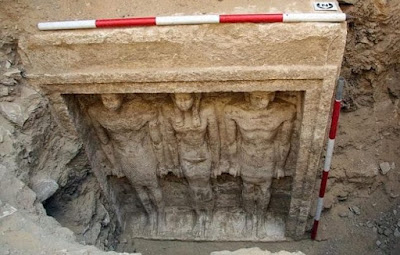 In 2015, archaeologists stumbled upon the tomb of a woman who was buried among the great pyramids of the Old Kingdom of Egypt. In her tomb were inscriptions calling her both “the wife of the king” and “the mother of the king.”

4,500 years ago, when this woman was alive, she would have been one of the most important people on the planet. She would have had greater power than any other woman in the nation. And nobody has any idea who she is.

Historians have dubbed her “Khentakawess III,” under the assumption that she was the daughter of Queen Kehntakawess II. They believe she may have been the wife of Pharaoh Neferefre and the mother of Pharaoh Mekahur—but they don’t really know. They’re just guessing.

If her name was Khentakawess III, then there are no references to her whatsoever in anything we’ve ever found. Whoever she was, she was once an incredibly powerful woman, but today, she is little more than an enigma.

I can't help but ask why someone so seemingly important remains unknown to this day. Quite a mystery...

Coffee in the kitchen. I have some strawberry bundt cake I'll share.
Posted by HermitJim at 12:00 AM

Quite the mystery, indeed. There is so much of the past that we don't know. Maybe one day....

There are still a lot of mysteries in Ancient Egypt. With modern science we are discovering more and more of the past. Thanks for the cake. It will go well with my coffee this morning.

I always loved watching the documentary's about Egypt, I hope they find out who she was someday . Since I don't have any pay channels I no long see them. But I no longer pay those crazy prices to watch TV.

I have a couple windows and the door open with the fans running I know it won't last more than maybe an hour but it feels nice to get some fresh air in here. Strawberry cake and coffee sounds lovely

Hard to imagine so little being known about someone in that position of power, but look how far communication has advanced in just our lifetime. The cake sounds wonderful, so save me a slice:))

Archaeology was always, and still is, my true passion. I don't know whether I would like for her to be identified or not. It seems to me that life needs a few mysteries like "The Marfa Lights". As the old saying goes nothing lives forever. I am also very curious though. 67 degrees on my front porch right now. Bring the cake and y,all come!!