Buffalo Bill Almost Made The Movies...!

During the times when the world was totally entertained by the Wild West Shows, the movies were coming of age. Folks like Buffalo Bill saw the writing on the wall, and made plans accordingly. 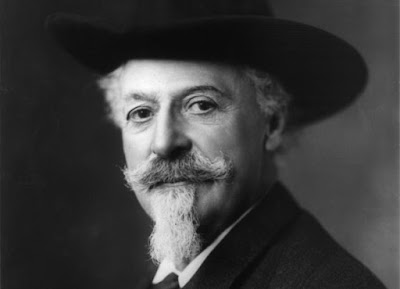 In 1913, Buffalo Bill (aka Colonel William F. Cody) complained that movies were taking audiences away from Wild West shows and circuses. Both would soon be out of business, according to him, with people wanting to sit indoors to see the sights of the world on a large screen. This probably explains why, in 1915, newspapers announced that “Buffalo Bill Breaks Into The Movies” with the film Patsy of the Circus.

Unfortunately, his movie career was over before it even truly began. Buffalo Bill died on January 10, 1917, in his sister’s home in Denver, Colorado.

I can't help but wonder just what will be our next big form of entertainment. Will we be mere spectators, or perhaps unwilling participants in that upcoming drama?

Coffee out on the patio this morning...OK?
Posted by HermitJim at 12:00 AM

I never knew this...The patio sounds good...as for what the future holds, I shutter to even think about it:((

Hey Mamahen...
I is a scary thing to ponder, that's for sure.
Thanks for stopping by today!

It scares me to even think about what the future holds for us. Patio sure sounds good to me. Especially after all the rain we have had, with more on the way.

I think we might be too busy with real world issues to spend much time looking at screens.

Enjoying a nice cup of dark roasted Timor coffee on a 30 degree morning.

Hey Linda...
Anything unknown, such as the future, can be scary...no question.
Thanks for the visit this morning!

Hey Sixbears...
In a way I hope you are right.
Thanks for coming over today!

With all I read about Buffalo Bill I don't thing it ever mentioned the movie, or I just forgot.