The Private Fear Of Stephen King...!

Who would have ever thought that one of my favorite writers of all times had a fear of anything? Certainly not I, that's for sure. It turns out that he has a fear of the number 13 as reported by Listverse.


Stephen King Is Scared Of The Number 13 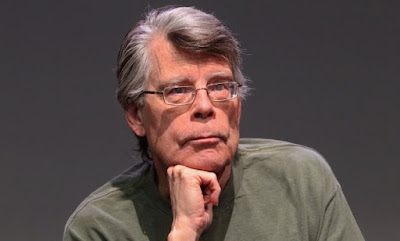 Stephen King is the most popular and successful contemporary horror writer in the United States. He has published over 260 titles, sold over 350 million copies worldwide, and continues to produce best-selling literature at a rate of about one book per year.

As the creator of The Shining (1977), Cujo (1981), Pet Sematary (1983), IT (1986), and Misery (1987), King has built the reputation of being the godfather of modern horror, both psychological and supernatural. Many believe that his taste for the horrific means that King is comfortable with the darker side of literature and life and has nothing to fear himself. But as King described in 1984, he is mortally afraid of the number 13.

Fear of the number 13[9] (aka triskaidekaphobia) can result in physical symptoms, such as panic attacks, and affects up to 10 percent of the US population. For King, this phobia manifests itself in more impractical ways. For example, he has to take the last two steps of a 13-step staircase in one stride, meaning that he only takes 12 steps. He also refuses to finish reading if he lands on pages 94, 193, 382, and so on, because the individual digits within these numbers all add up to 13.

King is especially frightened of what he calls “triple-whammy years,” in which Friday the 13th occurs three times. It’s even worse when these dates are 13 days apart. In one of these years, 1984, King stated that he was particularly fearful because he had been married for 13 years, had a 13-year-old daughter, and had published 13 books to date.

To King’s relief, most hotels do not have a 13th floor, many airplanes do not label the 13th seat, and France promotes the hiring of a professional 14th guest to avoid having 13 people sit at a dinner table.

I thought I knew a lot about Mr. King, but I reckon I was wrong. I didn't know of his fear of the number 13, but he is still one of my favorite writers.

Now I'm wondering how he assigns certain numbers to the pages of his books. Perhaps he has an editor do it for him (who isn't affected by the number 13). ;)

I would never expected that. Having a phobia of birds myself, I can understand his fear, but he would probably be that last person I would expect to have one. Raining here so your patio sounds good. I"'ll bring some snickerdoddles if anyone would like one:))

Wow, I never knew this about him.

Hey Kathy...
I think that all those task are done by the publisher and editor.
Thanks for stopping by this morning!

Hey Mamahen...
I am very fond of snickerdoddles, so I'll sure have one or 3.
Thanks for coming over today!

Hey Linda...
Certainly was a surprise to me. Guess you just never know about people and their secrets.
Thanks for the visit this morning!

Really who would think he has a fear after the stuff he writes. But I think we all have a fear of something.

See you my Friend on the patio before I head out for camping. And oh yes a snickerdoodle thank you Mamahen!