Why The Carved Pumpkins...?

If you have ever wondered where the traditional Jack O'Lanterns came from, here is the answer as we know it. The actual origin was an Irish legend about "Stingy Jack".


The Legend of "Stingy Jack" 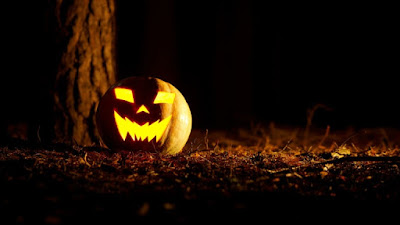 People have been making jack-o’-lanterns at Halloween for centuries. The practice originated from an Irish myth about a man nicknamed “Stingy Jack.” According to the story, Stingy Jack invited the Devil to have a drink with him. True to his name, Stingy Jack didn’t want to pay for his drink, so he convinced the Devil to turn himself into a coin that Jack could use to buy their drinks. Once the Devil did so, Jack decided to keep the money and put it into his pocket next to a silver cross, which prevented the Devil from changing back into his original form.

Jack eventually freed the Devil, under the condition that he would not bother Jack for one year and that, should Jack die, he would not claim his soul. The next year, Jack again tricked the Devil into climbing into a tree to pick a piece of fruit. While he was up in the tree, Jack carved a sign of the cross into the tree’s bark so that the Devil could not come down until the Devil promised Jack not to bother him for ten more years.

Soon after, Jack died. As the legend goes, God would not allow such an unsavory figure into heaven. The Devil, upset by the trick Jack had played on him and keeping his word not to claim his soul, would not allow Jack into hell. He sent Jack off into the dark night with only a burning coal to light his way. Jack put the coal into a carved-out turnip and has been roaming the Earth with ever since. The Irish began to refer to this ghostly figure as “Jack of the Lantern,” and then, simply “Jack O’Lantern.”

In Ireland and Scotland, people began to make their own versions of Jack’s lanterns by carving scary faces into turnips or potatoes and placing them into windows or near doors to frighten away Stingy Jack and other wandering evil spirits. In England, large beets are used. Immigrants from these countries brought the jack-o’-lantern tradition with them when they came to the United States. They soon found that pumpkins, a fruit native to America, make perfect jack-o’-lanterns.

Regardless of the fact of where the carved faces in pumpkins came from, the jack o'lantern is a fun tradition. I hope it continues for a long time.

Coffee in the kitchen this morning...just to avoid the ghost and goblins out there.
Posted by HermitJim at 12:00 AM

Pouring rain down here, so inside it definitely will be. A bug cold front coming our way, so temps are expected to be below freezing for lows the next few nights...I'm not ready for this:((

Hey Mamahen...
I don't think we are e3ver ready for the big cold fronts when they arrive. I know I never am.
Thanks for stopping by today!

I never heard this story before.

We are at 36 degrees this morning had to get up way to cold. So Fred and I had come to the computer room where the electric fake wood burning stove is at. Guess it's time to call the guy to turn on the furnace. But I'll dash over to your kitchen for for warmth of friends and some good hot coffee

Hey Jo...
Always room for you at the kitchen table, dear.
Thanks for dropping by today!