I may have covered this one before, but I find it is interesting enough to revisit. I hope you don't mind. 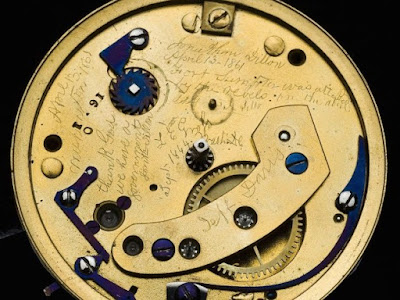 On April 13, 1861, Jonathan Dillon, an Irish immigrant and watchmaker, carved a hidden message in Abraham Lincoln’s pocket watch. Employed by M.W. Galt and Co. jewelers in Washington, DC, Dillon was repairing the president’s watch the day Confederate forces fired on Fort Sumter, which led to the US Civil War. The message would remain hidden until the Smithsonian opened the timepiece in 2009.

Dillon’s inscription read: “The first gun is fired. Slavery is dead. Thank God we have a president who at least will try.” Dillon and the president never met, and Lincoln never saw the message hidden within his timepiece.

In the 1850s, Lincoln purchased the gold pocket watch from George Chatterton, a jeweler in Springfield, Illinois. Lincoln tended away from the ostentatious, but the gold watch was a sign of his prominent law career. In 1958, the 16th president’s great-grandson, Lincoln Isham, donated the watch to the Smithsonian.

Imagine wearing something like that watch for all those years and never knowing there was a secret message inside. Outstanding if you ask me!

Hey Gorges...
I kinda thought so as well.
Thanks for stopping by today!

Hey Mamahen...
Just a little tidbit of mostly unknown history.
Thanks for coming over this morning!

To have that never seen before is amazing.

Nice cool morning here but will heat up to mid 90's. I'm ready for some coffee with you

Hey Jo...
I would have thought that someone would have seen it before so much time had passed.
Thanks, dear, for dropping by today!

Hey Dizzy...
I'm glad you found it interesting, sir.
Thanks for the visit this morning!

Quite the find. Great story!