Strange how history revels many stories of collateral damage or victims caused by horrific acts . Here is one from Lincoln's assassination that you may not know. 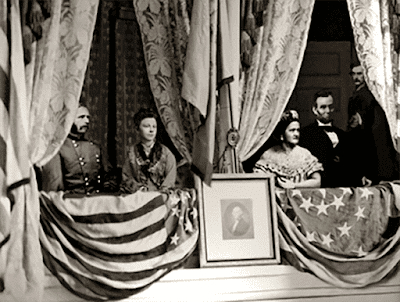 The Lincoln assassination was one of the saddest events in United States history. High-ranking members of the American government including Vice President Andrew Johnson and Secretary of State William Seward were targeted that night by Booth’s co-conspirators. One unintended victim intended was not: Clara Harris. A tangential involvement with the Lincoln assassination led to her death too.

Clara Harris was not even supposed to be at Ford’s Theatre that April night in 1865. She and her then beau major Henry Rathbone attended at First Lady Mary Todd Lincoln’s request. Following the recent victory of the Civil War, the theatre-goers were in a celebratory mood. But, as history well knows, the celebration was cut short when John Wilkes Booth barged into the president’s box and shot him in the head. Trying to apprehend the assassin, Rathbone grabbed Boothe’s arm but Booth stabbed him. With the bloody dagger still in hand, Booth escaped.

Years later, Clara Harris and Henry Rathbone married. Unable to part with her blood-stained dress, Clara had preserved it behind a walled off closet. She believed it might summon Lincoln’s ghost. Spirits talked to Rathbone too. Guilt driven for not stopping the tragedy, Rathbone heard voices in the walls. They blamed him for Lincoln’s death and ordered him to avenge the fallen president. With a murder straight out of The Shining, Rathbone recreated the assassination on Christmas Eve in 1883. He shot Clara and stabbed himself with a knife. Clara died. He then attempted to attack his children before groundskeepers could pull him off. Henry spent the rest of his life in an asylum.

The human mind is a strange and curious place, full of mysteries we will probably never understand. This is but one example.

Coffee out on the cool patio this morning.
Posted by HermitJim at 12:00 AM

That is really bizarre; never heard this story before. Wow!!!

Hey Rob...
Plenty of surprises hidden in history.
Thanks for stopping by today!

Hey Linda...
I guess this is one of those hidden stories in the pages of our past.
Thanks for coming over this morning!

As a side note Wikipedia indicates that Henry and Clara were actually step-brother/step-sister. Another twist!

Hey Ladybug...
I didn't know that!
Thanks for the visit this morning!

Not commenting often but still here enjoying your posts.

Hey Barney...
Your visits are always appreciated, my friend!
Thanks for taking the time to come by today!

I always learn something from your blog postings. Thanks for the information.

Hey Dizzy...
Glad to share what I pick up while browsing.
Thanks for the visit today!

Your right I didn't knwo about this. Another important fact in history found here.

Any coffee left just got back from the vet all seems well right now.

Hey Jo...
Glad that everything went well at the vet.
Thanks, dear, for dropping by today!

I had not heard that one before. The horror of it all.

Sorry im so late...That is one amazing story that I had never heard.

WEIGHT MANAGEMENT COFFEE WITH A NEUROLOGICAL PURPOSE
HELPS SHUT OFF CRAVINGS IN THE BRAIN FROM YOUR STOMACH
A LOGICAL SOLUTION TO WEIGHT MANAGEMENT
https://bit.ly/2MRnfuM