I think that we have talked about Chief Seattle before, but it never hurts to have another look at such a man as he. 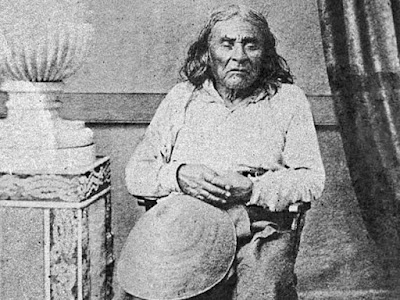 Born in 1790, Chief Seattle lived in present-day Washington state, taking up residence along the Puget Sound. A chief of two different tribes thanks to his parents, he was initially quite welcoming to the settlers who began to arrive in the 1850s, as were they to him. In fact, they established a colony on Elliot Bay and named it after the great chief. However, some of the other local tribes resented the encroachment of the Americans, and violent conflicts began to rise up from time to time, resulting in an attack on the small settlement of Seattle.

Chief Seattle felt his people would eventually be driven out of every place by these new settlers but argued that violence would only speed up the process, a sentiment which seemed to cool tempers. The close, and peaceful, contact which followed led him to convert to Christianity, becoming a devout follower for the rest of his days. In a nod to the chief’s traditional religion, the people of Seattle paid a small tax to use his name for the city. (Seattle’s people believed the mention of a deceased person’s name kept him from resting peacefully.)

Fun fact: The speech most people associate with Chief Seattle, in which he puts a heavy emphasis on mankind’s need to care for the environment, is completely fabricated. It was written by a man named Dr. Henry A. Smith in 1887.

I firmly believe that this man was very respected in his day, as was proper.

Coffee out on the patio again today.
Posted by HermitJim at 12:00 AM

Sounds like a wise man. Rainy and cool here today so your patio sounds great:))

I agree with you. He sounds like a very smart person and a wise one. Ver windy here today with clouds so your patio sounds good to me.

Hey Mamahen...
I reckon that he was indeed a wise man.
Thanks for stopping by this morning!

Hey Linda...
I think he saw the future of his people pretty well, and did what he could to make it better.
Thanks for coning over today!

Great story, I don't remember you posting this before. He was a great man.

Coffee on the patio if always fine with me.

Enjoying my morning coffee, reading your post. We visited the grave of Chief Seattle many, many years ago. It means so much more now that we are older. Have a wonderful day!

Hey Jo...
Glad you enjoyed the post.
Thanks for dropping by today!

Hey 2Tramps...
Good to hear from you again.
Thanks for the visit this morning!