We all love an old fashioned treasure hunt...right? Here is one from Listverse you might find interesting.


The Hunt for The Golden Owl 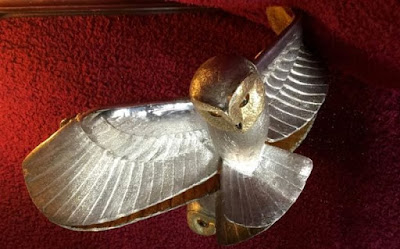 In the early 90s, author Max Valentin hid a bronze sculpture of an owl in flight in mainland France. Valentin was the only person who knew the location of the owl. He then published a book called The Hunt for The Golden Owl effectively setting up a treasure hunt with no time limit. The book contained riddles that needed to be solve in order to find the little owl, with the prize being not only the bronze sculpture but a statuette of the original owl in gold and silver to the value of one million francs.

The book also included several rules including prohibiting the winner of the treasure hunt from speaking to the public or media about the location of the owl or the solutions to the riddles in the book.

Max Valentin has since passed away and his publishing company went out of business, but the location of the little bronze owl remains a mystery. The creator of the silver and gold owl, Michel Becker, regained ownership of it via a court ruling in 2009 but tried to auction it in 2014. Luckily the owl’s status was protected, and it had to be removed from the auction. Becker is still in possession of the owl today.

Max Valentin is said to have produced a book of solutions to the riddles in his original book before he died but his son is holding fast to that document; honoring his father’s wish that the bronze owl be found by someone who could figure out the riddles.

This is one of those mysteries that you kinda hope never gets solved, ya know? Half the fun is trying to figure out the clues, isn't it?

Coffee out on the patio again this morning. Fresh gingerbread to go along with the coffee.
Posted by HermitJim at 12:00 AM

Very interesting. Wouldn't it be fun to solve the mystery though? Patio sounds great, and so does the gingerbread...I'm on my way:))

Hey Kathy...
It is pretty, for sure.
Thanks for stopping by today!

Hey Mamahen...
A treasure hunt is always fun. We haven't been on one for a while now.
Thanks for coming over this morning!

A riddle to hard to figure out is always the best. The owl is so beautiful.

See you on the patio and gingerbread to.

Hey Jo...
If it was easy, it wouldn't be fun.
Thanks dear, for dropping by today!