This article may seem a bit strange at first, but then when you think about it, it sorta makes sense. 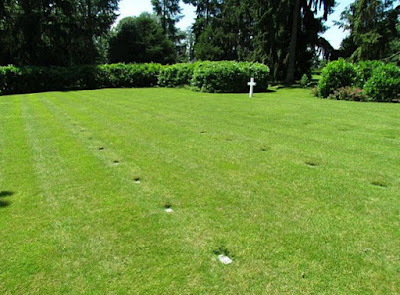 Oise-Aisne American Cemetery Plots A–D are standard enough—they’re used to represent 6,000 American soldiers who died in World War I fighting in France. They’re well maintained, easy to access, and a timeless honor for those who have passed.

To those who visit the cemetery, it’s easy to believe that plots A–D are the only plots the cemetery holds. But there is another plot that’s surrounded with overgrown shrubbery and not mentioned on the cemetery’s website or map. The only way to access it is to walk through the cemetery superintendent’s office—and even then, the door to it is usually locked.

This is the fate of Plot E, a cemetery with 94 bodies of people executed for crimes committed around World War II, including rape, murder, and desertion. Each “gravestone” is a marker the shape and size of an index card, which is embedded in the grass with just a number to identify it.

The people buried in Plot E are positioned so that their backs are turned away from the main cemetery site. No US flag is allowed to fly over Plot E, either. Due to this, Plot E has been labeled an “anti-memorial,” which acts as a stark contrast to the honored dead in the other four plots.

I had never heard of this before, but as I said...it makes sense in a strange way.

Hey Gorges...
Yeah, I thought it was.
Thanks for stopping by today!

Well! I had never heard if such a thing. I wonder if there is a record anywhere of who is buried there?

Interesting! I do think it makes sense tho as these people where criminals.

Hey Mamahen...
Yes, there is a record and it's kept in the manager's office under lock and key.
Thanks for coming over this morning!

Hey Linda...
That pretty much follows my way of thinking.
Thanks for the visit today!

Yes it does make sense,

See you all on the patio.

Yes, it does make sense.