Another Surprise From Mother Nature...!

How many trees does it take to make a forest? The answer just might surprise you as it did me.

The Forest Made Of One Tree 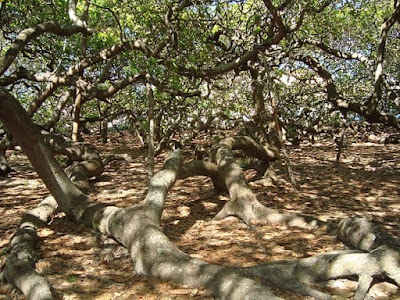 Nature is full of surprises. Just when she has you believing that it takes several trees to make a forest, bam! You get hit with the largest cashew tree in the world, found in the city of Natal, Brazil. Planted in 1888 by a local fisherman, this tree covers about 7,500 square meters (81,000 ft2) and has a perimeter of about 500 meters (1,600 ft). That’s about the size of 75 tennis courts. The Natal cashew tree currently holds the Guinness World Record for largest cashew tree in the world.

So what makes this tree so gargantuan? It has two unusual genetic traits that cause it to grow like it does. For one, the branches grow to the side instead of upward. The second anomaly is kind of freaky: The side-growing branches eventually get so heavy that they touch the ground. But instead of just resting there, the branches sprout roots. The newly rooted branch then starts growing upward as if it were a new tree. During harvest time, it’s estimated that the tree produces more than 60,000 cashew fruits.

Thanks to this article from Listverse, I now know that the surprises from Mother Nature just keeps on coming. I'm glad, because I really like cashews!

Coffee out on the patio this morning once again.
Posted by HermitJim at 12:00 AM

WOW! I never know what I'm going to learn at your place. See you on the patio:))

Hey Mamahen...
I t5ry and keep things interesting for everyone.
Thanks for stopping by today!


Hey Rob...
Yeah, it would seem so. Certainly covers a lot of ground.
Thanks for coming over this morning!

I love cashews also. This tree is amazing.

For some reason yesterday's post didn't show up while I was on yesterday, but read it this morning. Yes Mother Nature is a real beauty.
See you all on the patio

Hey Jo...
Yeah, yesterday I screwed up. Sorry about that, sweetie.
Thanks for dropping in today!

I love cashews. In fact I just ate a couple of handfuls of honey roasted cashews. Love them in all the different ways that they come, but the honey roasted is my favorite.

Hey Dizzy...
That sounds really tasty to me. I like anything honey roasted.
Thanks for the visit today!

I always love a good example of a beneficial mutation. This tree has two! It gives me hope that one day I could actually meet Wolverine.

Love them cashews! You do find the most out of the norm interesting stuff! Thanks, HJ.