A Question About Santa...!

Since I live alone and avoid crowds for the most part (crowds to me are groups of more than 3), I have a question about something that is Christmas related. Not trying to be a Scrooge or anything, but I'm just curious. 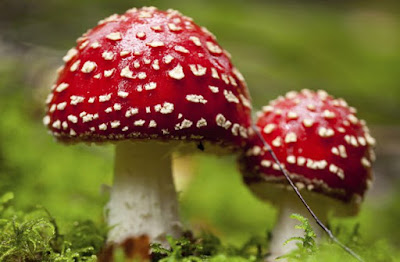 Santa Claus, or so we’re told, was based on the original figure of Saint Nicholas. But flying reindeer don’t quite fit with the idea of a kindly saint. According to Sierra College professor John Rush, that’s because the reindeer weren’t added as part of a Christmas story or in relation to Saint Nicholas. Instead, they were a product of magic mushrooms.

Throughout Siberia—reindeer’s natural stomping grounds—one of the most ancient of shamanic traditions included the gathering, drying, and distribution of the Amanita muscaria mushroom. The distinctive mushroom, which grows at the base of trees, is red with white flecks (which is said to explain the traditional depiction of Santa as wearing a red suit with white lining). Rush says that the distribution of the dried shrooms led to some fanciful hallucinations, including some that involved one of the most common animals in the area—the reindeer. Tripping tribes began telling stories about flying reindeer that showed up with their presents.

Others point to a much more sobering source for the flying reindeer myth—the mind of Clement Clarke Moore, who wrote “The Night Before Christmas” in 1822. The first compilation of all things that make Santa Claus who Santa Claus is, the poem was originally titled “A Visit from St. Nicholas” and is considered by many to be the definitive source for Santa Claus lore.

But he had to get the idea from somewhere, right?

Like I said, I'm not trying to be a Scrooge or anything like that. My curiosity just got the best of me, ya know?

Coffee out on the patio again this morning. 75 or so predicted, but I have gingerbread to share anyway.
Posted by HermitJim at 12:00 AM

Labels: Santa and the reindeer

Very interesting, as I never really thought about the flying reindeer before and how they came to be part of Santa Claus. I knew about the origins of the jolly old man; but you do raise a good question about the reindeer. I like the magic mushroom theory. Since it is cloudy and 21 degrees here on this first day of Winter, I'll be more than happy to join you on your patio. I'll bring a Christmas stollen to go with our coffee and your gingerbread. Happy first Day of Winter!

Hey Linda...
We gotta celebrate somehow, right? Coffee and fresh baked goods, what could be better?
Thanks for stopping in today!

It is the 1st day of Winter! Thank you Linda!
70 degrees & fog this morning in my part of Florida, a good start to the Winter if you ask me :-)

I have always thought of Santa as an elf, the little people do all kinds of things but I never gave any though to the flying reindeer. I like the magic mushroom theory.

On a side note there has been some promising work using magic mushrooms to treat depression.

Hey Rob...
Doesn't feel a lot like Winter here yet, but I understand we have cold air moving in from up north. Just in time for Christmas, I guess.
I'm glad they are finding help of some kind for depression and that some hope can be given to those that suffer with it.
Thanks for coming by today!

Your not being a scrooge. I'm not into crowds anymore either and so I'm off early this morning to finish buying the food for the 2 days of celebration at my house.

It is way to cold here and tonight we are in for a deep freeze UGH. See you on the patio and sounds like good things being served besides coffee.

Flying reindeer are just part of Santa's magic - or at least that's what we tell all our little questioners when we're doing our Santa gigs. They always ask where the reindeer are, and why they're not in the parking lot behind the hospital, library, etc. while they wait for us, so we're always ready with an answer. Sometimes they're in the local FFA barn, sometimes in the airport hangar, or the ambulance bay. But they eat special reindeer food, which just might include some special mushrooms to help with the flying. I'll ask the head groom in Santa's barn.

See you in a bit.

10 degrees this morning so coffee by the woodstove, looking out on the frozen lake.

Hey Jo...
I think that freeze is making it's way down South slowly. Supposed to get it Sunday here in Houston.
Thanks for dropping by, sweetie!


Hey Sis...
Sounds plausible to me. Gotta be ready for all those inquiring little minds, right?
Thanks for coming over today!

Hey Sixbears...
Any idea how thick the ice is? By the fireplace sounds pretty cozy to me!
Thanks for stopping by today!

I don't know exactly how thick. I have a very simple rule. Once there are pickup trucks on the lake, I can safely walk on it.

I cancelled Christmas here at my house this year. If Santa shows with his eight reindeer, he may just leave with only seven. I just love venison. . .


Hey Dizzy...
Might be dangerous at your house for deer this time of the year then.
Thanks for the visit today, Dizzy.